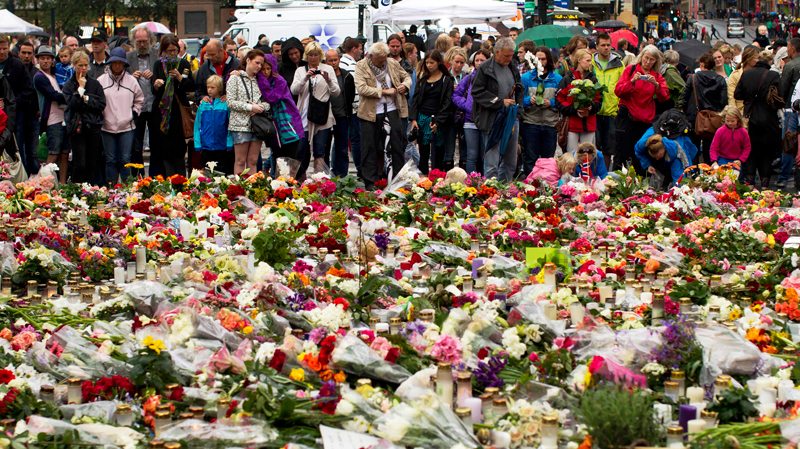 (July 28, 2011) –  There are certain events that are so painful and incomprehensible that they stop us in our tracks and make us wonder what kind of world we live in. The horrific mass murder of teens and young adults at a summer camp in Norway must make us pause to contemplate how such a thing could happen.

Simply blaming the individual as an aberrant case does not help us get to the bottom of the real issues at stake. Nor does it help us protect the children caught in the crossfire.

Initial media reports on Anders Behring Breivik’s dual assault on government buildings in downtownOsloand the Labor Party summer camp were quick to link the attack to “Islamic terrorism”. It was eerily reminiscent of early reporting on the 1995 Oklahoma City bombing perpetrated by Timothy McVeigh, when “experts” were quick to claim that the attack bore the hallmarks of “Middle Eastern” and “Islamic” terrorism.

When McVeigh was identified as the bomber, the American media did not associate his “Christianity” with the attacks in the same way that “Islam” was initially blamed. Instead, his frustration with his military service and political grievances were highlighted as the root causes of his violence. Because Christianity remains the majority religion in the United States and Western Europe, most Americans and Europeans were able to see McVeigh’s version of Christianity for what it was – an extremist and politicized interpretation that had little to do with mainstream Christianity in the West.

The same cannot be said of Islam, which remains one of the least understood religions in the United States and Western Europe today. The majority of Americans, for example, do not know enough about Islam to recognize how an extremist interpretation differs from mainstream practice.

Instead, sadly, we have seen cases time and again where individuals equate Islam with terrorism. They express anger about “Islamic terrorism” and fear of a “Muslim takeover” of the government. Stories about President Obama’s “secret Muslim identity” continue to circulate, as do accounts of sharia being forced into the American legal system – despite the absence of any concrete evidence supporting either of these claims.

Such a simplistic equation often leads to an exaggerated sense of threat. It can also lead to violence.

For example, some “concerned” members of the Oklahoma City community in 1995 responded to early guesses about the perpetrators of the bombing by harassing local Muslims and creating an atmosphere of fear, intimidation and hatred.

According to early reports, Breivik, fearing Muslim colonization ofWestern Europeand the rise of multiculturalism – and allegedly citing the influence of individuals promoting exclusive and intolerant worldviews – decided that the time for action had come.

76 people, mostly children and young adults, paid the price for his fear with their lives.

Our views of the world are shaped by what we read, see and hear, and by the ideas we are exposed to. Most people recognize that there is no justification for such atrocities and that the actions of terrorists cannot be excused. At the same time, if we fail to recognize and address the societal factors at the root of such behaviour, the cycles of anger, violence and hatred will continue.

How many more cases of angry responses to fear-mongering and Islamophobia must happen before we recognise its consistently deadly consequences? Preaching hatred, racism and bigotry leads to violence. It is never innocent and without intent. At some point, someone will take action.

And, more often than not, innocent children, who know nothing of the issues at stake, get caught in the cross-fire.

May God forgive all of us for allowing any child to live in an atmosphere where hatred and fear rule the day. The adults of this world owe children a commitment to learning to listen to and understand each other so that we can all live in an environment where everyone’s dignity, humanity, and, yes, religion, are respected.

Their safety and their lives depend on it.

*Dr. Natana J. DeLong-Bas is Editor-in-Chief of The [Oxford] Encyclopedia of Islam and Women and author of Wahhabi Islam: From Revival and Reform to Global Jihad. She teaches comparative theology at Boston College. This article was written for the Common Ground News Service (CGNews).