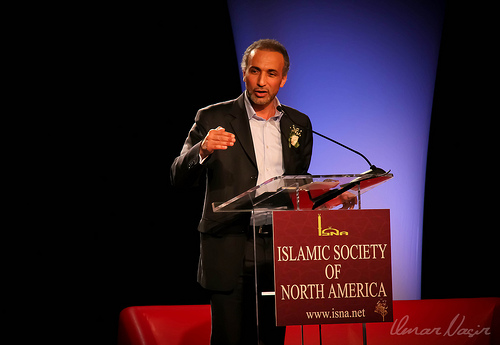 (May 14, 2011) – “To obtain social justice, we must be ‘humble with Allah and ambitious with humanity.’  Social justice is a means – not an end – to get peace within ourselves and in our societies,” said Tariq Ramadan, during his ICNA keynote address, “Social Justice: A Means to Attain Inner Peace,” in 2010.

The Islamic Society of North America (ISNA) has announced that Professor Tariq Ramadan will bring this message as he joins a list of renowned speakers at this year’s Annual ISNA Convention to be held in Chicago, July 1 – 4, 2011.

Ramadan will speak on “Islam, Love, and Social Justice.”

Tariq Ramadan is Professor of Contemporary Islamic Studies at Oxford University and speaks regularly on the topic of social justice and dialogue between different communities, locally and globally.

Professor Ramadan was voted one of Time Magazine’s Top 100 Innovators of the 21st Century.

Through his writings and lectures he has contributed substantially to the debate on the issues of Muslims in the West and Islamic revival in the Muslim world.

Ramadan is active both at the academic and grassroots levels lecturing extensively throughout the world on social justice and dialogue between civilizations.

Professor Ramadan returned to the U.S. last year after a hiatus, and was met with much enthusiasm from convention attendees during his keynote address at the ISNA Community Service Recognition Luncheon and Saturday night convention main session.

“We are pleased to once again include him in this year’s convention and bring his inspirational knowledge to the national Muslim community as we all struggle for social justice and equality in America,” said ISNA in a statement.

Information on this year’s 48th Annual Convention to be held in Chicago, visit www.ISNA.net