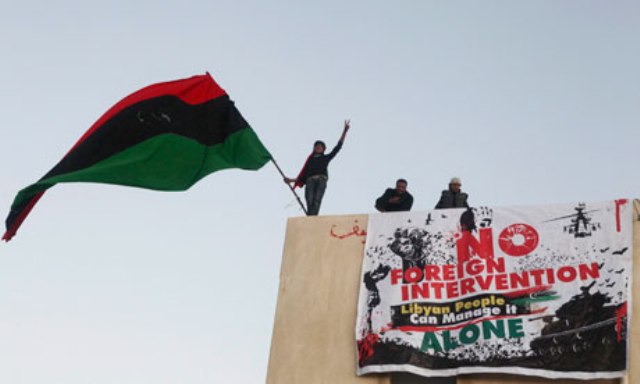 While American and British politicians have ramped up talk of a no-fly zone, US warships have been sent to the Mediterranean, Italy has ditched a non-aggression treaty with Tripoli and a full-scale western military intervention in yet another Arab country is suddenly a serious prospect.

The hawkish rhetoric and a well orchestrated supportive media are in full concert where voices of reason are shut out.

The US television is in full battle mode.

Meanwhile, Secretary of Defense Gates has rightly pointed out, the last thing the U.S. needs right now is a war in another Muslim country.

The Arab League has stated its strong opposition to external military intervention.

And even among the Libyan rebels in rebel-held territory there is clear division over calls for Western military intervention.

Those who are in solidarity with the Libyans fighting for freedom are denouncing any attempts by the Western forces, especially elements within the administration in the United States and the Harper government in Canada, to intervene militarily.

Revolutionaries in Libya do not need any outside military intervention.

The Western strategic thinkers understand why it is urgent for them to intervene in North Africa because from medieval times right down through the Nazis in Germany, the occupation of Libya, right next to Egypt, was strategically important for access to North Africa and Arabia.

So the strategic thinkers in Washington and NATO are considering that, with the impending isolation of Israel and with revolutionary processes all over Arabia and North Africa, it is very important for the West to have a foothold.

The concern that is being expressed by US Secretary of State, Hillary Clinton, is not for the revolution in Libya, but is a concern for oil and for the destabilization of the Egyptian revolution because of the long-term implications of this revolution for Africa and the Middle East.

This is a priceless opportunity that has fallen into West’s lap; it’s a chance for us to improve our image in the eyes of Arabs and Muslims.

Don’t mess it up.

All of West’s previous attempts to bring the East and the West closer have failed and some of them have made things even worse.

Ask beleaguered Iraqis and Afghans how they feel about the US intervention, occupation and mass destruction.

Hillary Clinton and Barrack Obama have changed their tunes to suit the events unfolding in North Africa and the Middle East.

But no one can fool the people on Arab streets by this.

They  can see exactly how much the current US administration cares for freedom and democracy when it backs the Bahraini royal family, in spite of the horrific violence the ruling clan unleashed on protesters in Pearl Square, or when it praises the Moroccan  king for allowing the protests, even though demonstrators were beaten some days later in Rabat.

Hardly a month ago, when protesters were fighting for their lives in Tahrir Square, John McCain the indefatigable supporter of US military intervention in Iraq told Fox News’s Greta Van Susteren that “this virus is spreading throughout the Middle East…. This, I would argue, is probably the most dangerous period of history in—of our entire involvement in the Middle East, at least in modern times. Israel is in danger of being surrounded by countries that are against the very existence of Israel, are governed by radical organizations.”

Now suddenly, McCain says that US should be supporting the rebels.

Reform is what people want, not dark forces allied against them repressively.

The Arab revolution will be made by Arabs or it won’t be a revolution at all.

*Javed Akbar is a freelance writer based in Toronto