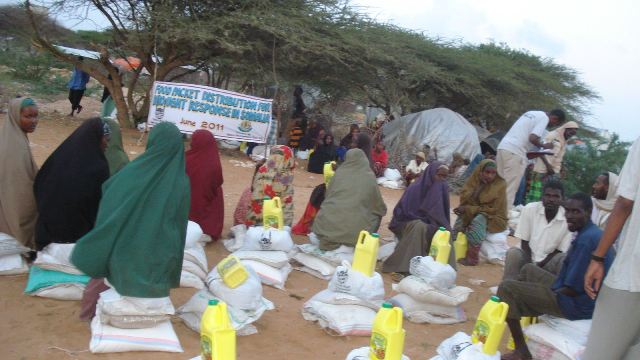 (July 21, 2011) – The United Nations has declared a famine in parts of Somalia, the highest food security alert level, as the humanitarian crisis worsens in drought-ravaged communities across East Africa.

Twenty years of conflict and waves of drought have uprooted a quarter of the country’s 7.5 million people.

As the region faces its most severe drought in 60 years, the Somali exodus is growing fast.

The UN uses a five-point scale to describe food insecurity.

Last week the region was listed as stage four: emergency.

The UN’s declaration elevates the crisis in Somalia to stage five: catastrophic/famine.

This qualification means that up to one out of every three people is acutely malnourished and most people will experience a death in their family due to the crisis.

An additional 2,600 Somalis had crossed the north-western border into Djibouti by mid-2011.

The refugees say they fled a combination of violence and drought in Somalia.

Many are waiting until the last possible moment to flee, putting up with violence, crop failures and rising food prices until they can no longer survive where they were.

Insecurity prevents aid from reaching them, forcing people to leave their sick and elderly behind and flee their homes to get help.

Many walk for weeks to reach aid in neighbouring countries.

Some do not survive the harsh journey; the weakest children die along the way as their mothers watch helplessly.

Those refugees who make it to Kenya or Ethiopia’s camps arrive exhausted, dehydrated and severely malnourished.

They also need clean water, shelter and basic services in the camps.

The UN refugee agency is seeking US$136.3 million in funds for emergency relief in the host countries of Djibouti, Ethiopia and Kenya, which are themselves hard hit by the drought.

UNHCR has also urged for improved access in Somalia itself so that affected people can receive aid without having to flee their homes.

Canadian aid agencies are calling on all Canadians to make urgently needed donations to support relief operations and help avert a catastrophe on the scale of the 1984 famine in East Africa that killed over a million people.

DONATIONS CAN BE MADE TO: