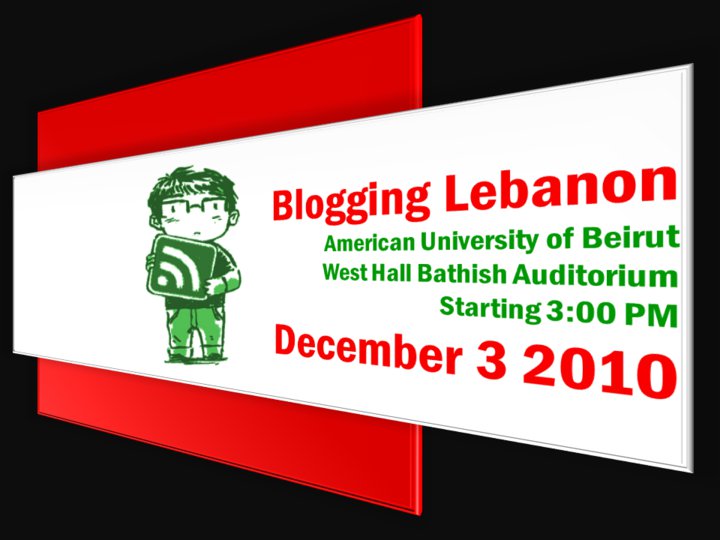 (January 30, 2011) – In December, the Online Collaborative Club of the American University of Beirut organised Blogging Lebanon, a conference for more than 150 Lebanese and Arab bloggers, e-activists, journalists, students, professors and others interested in social media. This convention demonstrated that social media is central to the Arab world today, and essential for positive change.

In the Arab world, many diplomats and politicians have started using social media tools to improve their relationships with citizens. Examples include Dubai monarch Muhammad bin Rashid, Jordan’s Queen Rania Al Abdullah, and the wife of Qatar’s emir, Sheikha Mozah bint Nasser Al-Missned. These high-profile people all have personal accounts on Facebook and Twitter, demonstrating how much social media has evolved. Now, even diplomats and politicians are discussing society’s problems and issues online. But not everyone is finding it easy.

British Ambassador in Beirut Frances Guy spoke during the convention about difficulties that diplomats face when blogging. She herself came face-to-face with such difficulties when she blogged about the passing of spiritual Shiite leader Muhammad Hussein Fadlallah and praised him, only to apologise in another blog if the “praise” offended anyone since her posts sparked extensive controversy.

Lebanese politicians have taken advantage of this social media to encourage debate and conversation on Facebook and personal blogs, and to respond directly to questions — especially from youth — about a variety of social and political issues. For example, Lebanese parliament member Nouhad Machnouk organises a weekly live discussion with youth on Facebook and has over 3,000 followers on the site.

The rise of social media — and politicians using it — may be due to the fact that mainstream media in the Arab world has lost part of its credibility because media industries are usually run by political parties. In these media outlets the news is reported and interpreted in a way that serves the interest of the party, particularly in Lebanon.

Perhaps because of this, youth have started to use the internet and online tools as one of their main sources of news and information. Accordingly, politicians have begun to go online to connect with youth and build a direct relationship with them. In this way, social media is actually reshaping how politicians relate to constituents.

In addition to becoming a meeting space for officials and their constituents, blogging has also become a forum for resourceful creativity that can reshape social norms.

This is evident in Shankaboot, an online mini-series that examines social issues in the Middle East, focusing primarily on issues facing Beirutis that are not addressed by traditional Lebanese television dramas. It is the first of its kind in the Arab world.

The series highlights issues facing the marginalised and poor, which are rarely portrayed in media. In particular, Shankaboot reflects challenges facing youth like drugs, domestic violence and unemployment. The series depicts daily life in Beirut as well as the adventures of Suleiman, the main character, a young delivery boy who crosses the city on his motorcycle.

During the Blogging Lebanon convention, Arek Dakessian, Online Content and Community Manager ofShankaboot, and Toni Oyry, the mini-series’ Project Manager, spoke about their use of social media tools to reach the general public. Shankaboot has already touched more than half a million people, including 337,000 visitors to the main website (shankaboot.com), 291,000 YouTube viewers, 18,500 Facebook friends, and 1,163 Twitter followers.

The most significant conclusion of the conference was that no one is immune to social media. Activists in Lebanon and the Arab world use it to protest human rights violations or support causes. Government officials use it to communicate and gain feedback from their constituents. “E-activists” have used it to defend bloggers, journalists and activists who have been arrested for expressing their opinions, such as Bahraini blogger Ali Abdel Imam, arrested for “spreading false information”.

* Hani Naim is a journalist, blogger and civil society activist. He participated in many civic campaigns in defence of human rights and public freedoms in Beirut. This article was written for the Common Ground News Service (CGNews)