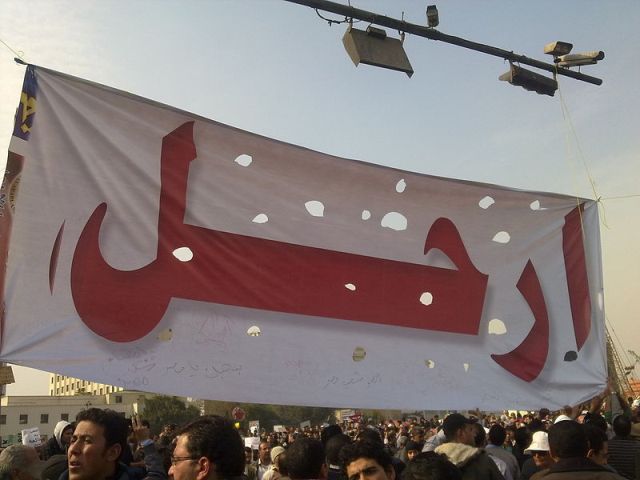 (February 8, 2011) –  Protestors in Egypt continue to fill Tahrir (Liberation) Square by the tens of thousands, building on two weeks of massive demonstrations calling for President Hosni Mubarak’s resignation. Though the protests have been mostly peaceful, the demonstrations have not been free from violence. Pro-government protestors – reportedly organised by the state – have thrown stones and Molotov cocktails, and wielded clubs against journalists and pro-democracy activists in Cairo’s Tahrir Square.

The optimism first seen at the protests has been dampened with the outbreak of violence, but demonstrators have not let up in their push for political change. As larger questions about high-level politics, transitional leadership and diplomacy fill the news, we should not forget that stories of ordinary people’s hope and solidarity have been an intrinsic part of the protest movement.

The revolution in Egypt has brought people together: Neighbours are figuring out how to provide services to neighbourhoods, people of different faiths are marching alongside one another and international activists are amplifying Egyptians’ voices.

Even though the future of Egypt is unknown, these stories suggest that there is potential to build a stronger country from the ground up.

Despite the chaos in the streets, residents of Cairo and other cities have formed groups to protect electricity, water and gas supplies. Neighbourhood groups have also sprung up in the absence of the normal police presence to guard residences and businesses from looters. Khalid Toufik, a member of one such group in Alexandria, said in a recent New York Times article, “We want to show the world that we can take care of our country, and we are doing it without the government or police.”

In Tahrir Square, crowds have been chanting, “Muslim, Christian, we are all Egyptian!” T-shirts painted with protest slogans also feature crescents and crosses as symbols of unity. There are even reports of Muslims kneeling in prayer while Christians formed a wall to protect them from police.

Women are protesting alongside men, youth alongside the elderly.

These anecdotes and images provide a different picture of Egypt than what is all too often reported in Western media: political stagnation, religious divisions and factionalism. Even the change that has already occurred seemed inconceivable months earlier. And religious unity seemed distant, especially in the wake of the Alexandria church bombings in January.

But it is perhaps because of such tragic events that Egyptians are keen to demonstrate that religious coexistence is not just an abstract hope, but often an everyday reality.

Internationally, individuals, groups and companies have found ways to show solidarity and bring Egyptians’ voices to the world. Google and Twitter joined together during the Internet blackout to create Speak2Tweet. The application lets Egyptians call one of three phone numbers and record a message, which is then tweeted on the Speak2Tweet account and made available globally, as well as translated on another website, Alive in Egypt.

Tools like this have helped people in far-off places feel invested in Egyptians’ struggles and daily realities, and have also provided on-the-ground, up-to-the-minute reporting.

A significant sign of hope was the military’s announcement last week Monday night that it would not use force against protestors. With several people dead and at least a thousand injured already in the early days, this was a welcome moment.

The military has not stopped pro- and anti-Mubarak clashes from occurring, but instead it maintained its neutrality. Last week, however, The Guardian reported that it had intervened to stop pro-Mubarak demonstrators from throwing stones at protestors, showing that the military can still play a role in quelling violence.

The past few weeks have demonstrated that the way we understand a particular place – and the narratives we have about the future – can change in an instant. I studied in Cairo in the fall of 2003, which also coincided with the third anniversary of the second Palestinian intifada. A protest was organised in Tahrir Square, where state security forces seemed to outnumber protestors so much so that one activist told the Egyptian newspaper Al Ahram Weekly, “We’re 100 to one.”

In recent days, those numbers – and the force that goes with them – has been reversed.

Many of us remain hopeful, but uncertain, of what its future will look like: small changes to the existing structure, a new regime in place or a unity government? But despite the darkness of the recent violence, the work of everyday Egyptians joining together across lines that might divide them and finding ways around day-to-day obstacles should still give us hope for the future.

* Laurna Strikwerda is a program coordinator with the Muslim-Western dialogue program at the international conflict transformation organisation Search for Common Ground. This article was written for the Common Ground News Service (CGNews)