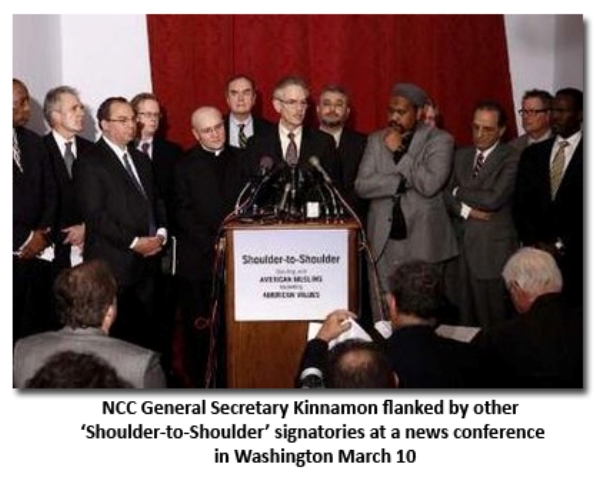 (March 10, 2011) – More than 25 U.S. religious leaders from Christian, Jewish, Sikh, Muslim and other organizations issued a statement today, saying they stood “shoulder-to-shoulder against extremism of all kinds in support of American values.”

Signatories included the general secretary and heads of member communions of the National Council of Churches.

The text of the statement follows:

As American religious leaders, we share a deep sense of obligation to call upon our fellow citizens to treat each other with compassion and honesty, and to foster an ethical commitment to bedrock American values such as pluralism and religious freedom, mutuality and respect—values also at the core of our religious traditions.

As the House Committee on Homeland Security convenes hearings on the putative “radicalization” of American Muslims, our obligation takes on renewed urgency. We gather together to affirm that we stand united with all Americans in urging our elected representatives to act—not against a single, unfairly maligned group, but against all forms of violence and extremism that endanger our security. As spiritual leaders and people of faith, we call on the United States Congress, elected officials at every level of government, and all American citizens not to perpetuate damaging false witness against our neighbors.  Instead, we encourage all communities of faith and people of good will throughout this country, to stand shoulder-to-shoulder in communities of growing awareness, trust and hope.

All of our faith communities share a powerful prohibition against bearing false witness, with the understanding that destroying a person’s reputation is tantamount to destroying his or her life. To assert that Muslims as a broad group are not deeply devoted to America’s safety and the peaceful interaction of its entire citizenry – that is false witness. By subjecting American Muslims to such scrutiny, we weaken our more perfect union, and we harm the national vision of our common good that is a witness to the nations.  We encourage all citizens of this country to honor freedoms guaranteed by our Constitution that enable the free exercise of religion across our great land.

Far from a “radicalized” fringe group, Muslims are woven into the American tapestry. Muslims serve as teachers and factory workers, doctors and lawyers, social service volunteers and loving parents.  They serve proudly and with distinction in the military and FBI, on police forces and in fire departments, and in all branches of the US armed services next to soldiers of all faiths, many having given their lives for our country.  In these and other vocations, Muslims work hard, give back to their communities, and worship in peace. The Muslim community’s clergy work closely with the leaders of our nation’s other faith groups where we study our sacred texts together, pray together, and join hands to address issues of shared concern, such as homelessness, drug abuse, and violence against women.

The rationale for these hearings rests on an assertion that the American Muslim community has failed to support American law enforcement in its efforts against terrorism.  This assertion is false.  A study by Duke University indicated that “the largest single source of initial information” in helping prevent terrorist attacks were members of the Muslim community.  In fact, the American Muslim community is deeply engaged in preventing terrorism.  We regret that the Committee on Homeland Security held such a hearing today with specific focus on the Muslim community, and in the future we encourage its Members to listen not only to the voices of Muslim Americans and the law enforcement community, but also to witnesses from other faith communities, leaders who can stand up for the good character and ethical behavior of their Muslim brothers and sisters.  It is unfortunate that Chairman King did not call any law enforcement experts to testify to the claims he has made.

We urge the members of our government as well as citizens of good will to refrain from passing judgment on religious or faith groups based on the actions of the few who pervert their spiritual traditions through acts of violence and hostile rhetoric. We believe that politicians, cultural figures and members of the media are never justified in exploiting religious differences in order to advance ideological or political aims. Our leaders in Congress and the Administration must stand up and speak out against these hearings – hearings that perpetuate misrepresentations and harm our country rather than lead it to greater awareness and a strengthened citizenry.

Spiritual leaders have a moral responsibility and a sacred calling to categorically denounce derision, misinformation or outright bigotry directed against anyone, regardless of faith community. Silence is not an option. Only by taking a stand together can we fulfill the highest calling of our respective faiths, and thereby play a role in building a safer, more secure America.

Shoulder-to-Shoulder: Standing with American Muslims; Upholding American Values is a campaign of national faith-based organizations and religious denominations to promote tolerance and put an end to anti-Muslim bigotry.

Members of the Shoulder-to-Shoulder Steering Committee

President and Founder, The Foundation for Ethnic Understanding

General Secretary, National Council of Churches of Christ in the USA

President, The New Evangelical Partnership for the Common Good

Director, Faith and the Common Good (a project of Auburn Theological Seminary)

General Minister and President, The United Church of Christ

General Secretary, General Board of Church and Society of the United Methodist Church

Co-Chair, The Regional Council of Churches of Atlanta