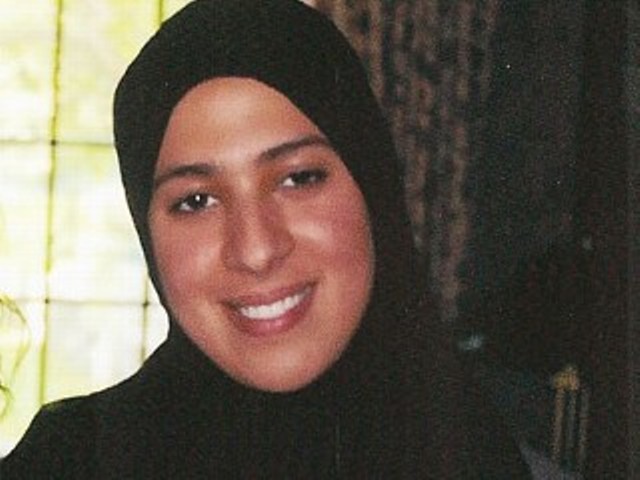 (March 7, 2011) – Rehab El-Buri, a former ABC News staffer who helped shape the network’s coverage of the Arab world, died Sunday at the age of 26 after a courageous battle against cancer.

According to a tribute by the ABC News Investigative Team, Rehab El-Buri began “as a desk assistant and working her way to the Investigative Unit, Rehab was committed to reporting on the plight of those who could not speak out on their own. Her work was defined by giving a voice to the voiceless, steadfastly working behind the scenes to tell their stories.”

“In 2008, Rehab was instrumental in developing a 20/20 report that investigated how some high-ranking international diplomats in the U.S. would abuse and exploit the domestic workers brought with them from their home countries,” the ABC News Team wrote.

Rehab was an activist in the American Muslim community, who gave preference to others over herself.

Reprinted below is a moving tribute to Rehab El-Buri by her husband, Zaied Abbassi

Core lessons I learned from the life of my beloved wife, Rehab

May the Peace and Blessings of God be Upon You

On Sunday night (March 6th, 2011) I gave a very brief reflection on core lessons I learned from the life of my beloved wife.

I have tried to transcribe that message as accurately as possibly here for those around the country, and the world, who would have liked to be there but could not.

In the Name of Allah the Most Gracious, the Most Merciful

I have spoken publicly many times in my life but I have never been as nervous as I am tonight.

I was not sure if I wanted to speak tonight – and let me explain my nervousness for a moment.

A few months back, Rehab learned of a close friend who had an illness in her eyes that needed an operation that costs roughly $16,000.

The girl’s father had recently passed, and I believe her brother had also recently suffered a tragedy – in short the girl had little support.

Rehab decided she wanted to help collect the $16,000 and planned to do a bake sale after Friday prayers.

The bake sale generated over $20,000 in sales and donations, and Rehab drove the money to her friend in Baltimore the next morning.

You see there was a strange barakah (blessing) in her deeds near the end of her life.

Things would just work for her. And, as I sat here earlier listening to Islam (Dr. Islam El-Fayoumi – a local speaker and teacher) give his talk, I thought “How perfect!

This is exactly how Rehab would want this gathering to be.

People coming together to understand the Book of Allah, and from Islam – whose classes she loved to attend.”

I figured Allah was protecting this gathering for Rehab.

Islam would go until 8:00 and I wouldn’t have the chance to ruin it.

But, Allah has Willed that I speak and I hope there is some benefit in it.

In my almost 6 years of life with Rehab, I learned quite a bit.

The lessons cannot be counted.

But I wanted to share today two profound lessons, and I want to explain them by telling you two stories from the last few months of her life.

First – In October of last year, Rehab and I were driving to Memorial Sloan (the cancer center where she was treated) for an appointment and Rehab was talking to me about wanting to give up many of her projects and responsibilities.

For months the news on the cancer was getting progressively less optimistic – we found more than 20 tumors in her brain, new tumors in her ribs, etc – and Rehab was thinking she needed to focus on her health.

When we met with her oncologist that day, we received the first piece of optimistic news for as long as we could remember – the tumors in her brain had been stabilized (they had stopped growing) by her radiation treatment, and we had some hope – some more time to wait for a new drug to become available that could systemically treat her illness.

As we walked towards the elevator after the appointment, I looked at Rehab, and with tears in her eyes she said “Wallahi [I swear by Allah] life is about ridaa Allah [seeking the pleasure of God], everything else is just circumstance.”

I immediately knew what she meant.

She felt guilty that on the car ride over, her goals had changed.

Her goal became trying to get healthy – now there is absolutely nothing wrong with focusing on her health, mind you – but she was guilty that her end goal had changed.

On the way back to the car she kept repeating “Life is about ridaa Allah, and everything else is circumstantial”

Second – this past week in the hospital, the Muslim Chaplain at Memorial Sloan would stop by Rehab’s room several times a day hoping to get in to see her and praying for her.

He would come sobbing, and would bring her gifts to keep her comfortable even though we knew we were just waiting for her to pass.

He was so emotional, yet if you wanted to stretch it you could say Rehab and the Imam had spoken for maybe two hours in their entire lives.

Now, as I observed on Rehab’s Facebook page this past week, and through all the phone calls, emails, and text messages we have received it became abundantly obvious that Rehab touched people in a unique way, and I thought the Imam at Memorial Sloan was a perfect example.

A few months back, during one of Rehab’s hospital stays in the summer; the Imam came into her room and sat with us for roughly an hour.

He talked to us about his strategies for the hospital, challenges he faced, how he handles working with people of other faiths etc – a very unusual visit for a Chaplain to make in the middle of his rounds.

It was obvious during the conversation that the Imam held Rehab in high regard.

Wanting to know why this man was so enamored with my wife while practically ignoring me in the room, I brought up the question of “why” – why did he feel so strongly about her. His response was simple…

A month or so before that visit, the Imam was telling Rehab and I about a program they do every Eid where they buy gifts for all pediatric patients in the hospital and make a celebration of it.

Every year, he explained, they would fall short in financing and would have to skimp on the gifts and decorations.

Rehab, completely exhausted with IVs running into every possible vein, looked up at him and promised she would get him the money.

The Imam had a surplus of cash to hold over for next year’s celebration.

So, when I asked him why he was so enamored with my wife his response was simple – “She said she would do something, and she did it. Not many people are like that.”

The lesson I pulled from this was – amal (action) trumps everything.

When you can combine the intention I mentioned from the first story with action – Allah will make remarkable things happen.

Believe me – these two lessons were at the core of who Rehab was.

If I were to ask you for anything today, it would be that you take heed of these lessons and live them out in your life.

Thank you, and if I may I will end with a small prayer for my wife.

O Allah, all Thanks and Praise are due to You until you are pleased with us;

And all Thanks and Praise are due to You if You become pleased with us;

O Allah, we ask of You Paradise, and seek refuge in you from Hellfire;

O Allah, You have tested your slave with a difficult trial, and she was patient and content throughout so accept her as one of the martyrs;

O Allah, accept her as one of the martyrs;

O Allah, she lived her life only seeking Your pleasure so be pleased with her;

O Allah, her greatest dua [prayer] near the end of her life was to be from among the “sabiqoon” so accept her as one of the sabiqoon;

And we end by saying All Thanks and Praise are due to Allah, the Lord of the Worlds.