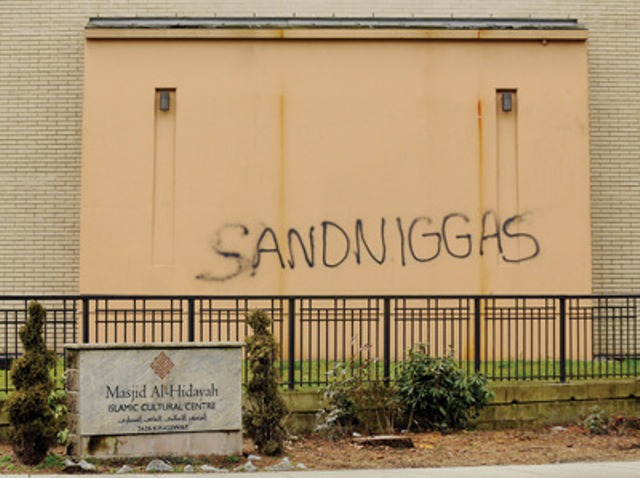 (March 12, 2011) – The RCMP’s hate crime unit is investigating after racist graffiti was sprayed on the side of a Vancouver-area mosque last Thursday.

Mosque members arrived at the Masjid Al-Hidayah Islamic Centre in Port Coquitlam to find graffiti spray-painted on the building.

A local member of the Muslim community said, “This is extremely disturbing … and psychologically jarring, as the masjid represents a place of sanctuary and peace.”

“It is considered something racial and the offenders have no respect to faith in general,” said Mosque board member, Dr. Saad Bahr. “We are shocked because it is the first time we have seen something like that. We have been in the area since 1994.”

Muslim civil rights groups are condemning the incident and applauding the decision of law enforcement officials to investigate the incident as a potential hate crime.

“We call on politicians, security officials and community leaders in Port Coquitlam to stand firm against all forms of hate, racism and xenophobia.  These acts and the physical damage they cause represent cowardly attempts to intimidate and divide communities by further stigmatizing visible and vulnerable minorities,” said Ihsaan Gardee, CAIR-CAN Executive Director.

Canadian Islamic Congress national president, Wahida Valiante, is gratified that the incident is being taken seriously by the local RCMP but concerned about its effect on the community.

“Although this is an isolated incident and most likely the result of ignorance and mischief, it is unsettling to the Muslim community and especially frightening for children using the facility,” said Mrs. Wahida Valiante. “The targeting of religious places is always abhorrent; it erodes the fundamental Canadian values of mutual respect on which our diverse society is built.”

Police are encouraging anyone who saw anything suspicious Wednesday evening around the centre to report it. The building has security cameras, but they don’t face the wall.

“Any graffiti can have a negative impact on how safe people feel in their neighbourhood, and it’s much more disturbing when the graffiti is a racial slur,” said Const. Kristina Biro in a press release.

“We encourage anyone that sees criminal or suspicious activity to report it to police.”