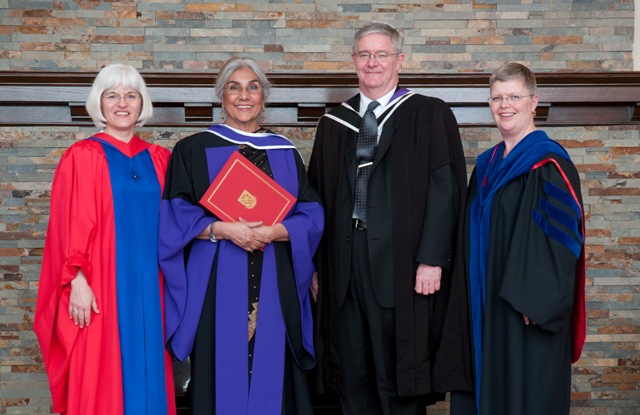 (May 31, 2011) –  Queen’s School of Religion conferred an honorary Doctor of Divinity degree on Alia Hogben, a fierce, eloquent and courageous champion of the rights of women and, in particular, those of Muslim women.

The 2011 Spring Theology Convocation was held on Wednesday, 11 May 2011, in Grant Hall on the Queen’s University campus in Kingston.

As a social worker she advocated on behalf of those who did not always have the voice to speak for themselves: women, children, immigrants, the poor, the mentally ill, and those with developmental handicaps to name a few.

Ms. Hogben has been part of the Canadian Council of Muslim Women since its inception, currently serving as Executive Director.

With the Council, she has worked tirelessly to assist Canadian Muslim women and others to learn about Islam and its message of equality, plurality and inclusiveness and to seek changes in policies affecting all Muslims, especially Muslim women.

Under her direction, the Council has commissioned and disseminated many scholarly reports on the lives and rights of Muslim women in Canada, contributing to the education of Canadians about women and Islam.

Ms. Hogben seeks to counter ignorance and fear of Islam with facts, reality and research.

She is an articulate proponent of a vision of Islam that is broad, inclusive and egalitarian; a vision that, in her view, fits well in a pluralistic country such as Canada.