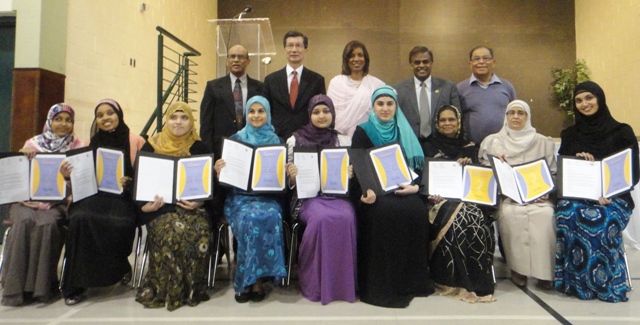 (May 4, 2011) – Eleven women and girls from the community of the Islamic Foundation of Toronto were recently honored by the Government of Ontario.

On Wednesday, April 27, 2011 a ceremony was held at the Islamic Foundation of Toronto to recognize the women.

The Leading Women/Girls, Building Communities Recognition Award is awarded by the Ontario Government to women and girls for their extraordinary volunteerism – in their community work, leadership and contribution towards improving the lives of women and girls in Ontario.

The recipients of The Leading Women, Building Communities Award were Jameela Rasool, Faria Bari, Azba Hathiyani, and Nadia Warsi. They were all recognized for their leadership role in the Islamic Foundation community.

It is due to their dedication and diligence that the Centre has flourished so much.

Jameela Rasool who has a life-long association with Islamic Foundation of Toronto and School, is an eminent member of the Muslim community who has been at the forefront of the growth and the success of the young generation from all backgrounds.

Faria Bari, on the other hand, has led the community and its women through many programs and events.

Azba Hathiyani, a former graduate of the Islamic Foundation School, has headed many organizations and committees and currently attends the University of Toronto.

Nadia Warsi, also an alumnus of the Islamic Foundation School, now studies at York University. She has volunteered for various organizations and serves as an executive and on the board of many community organizations and committees.

All high school students at the Islamic Foundation School, these are the leading young women of the school. They were honored for their leadership skills and community involvement.

Among other achievements, these girls have provided their services by tutoring, fundraising for health groups, leading support groups for their peers, writing articles on current issues, serving as members on the student council, and volunteering for diverse causes.

The girls embody the phrase “Leaders of Tomorrow” and have a lot of potential to serve the province of Ontario and Canada.

All of them applauded the award recipients. A clear message that resonated from the speakers revolved around the involvement of women in Canadian society, particularly Muslim women.  Also in attendance were many community and youth leaders.

Harry F. Banks, an American leader, once said, “For success, attitude is equally as important as ability.” The women and girls who have received this award have shown that they care for their community and for making the world a better place for the human family.