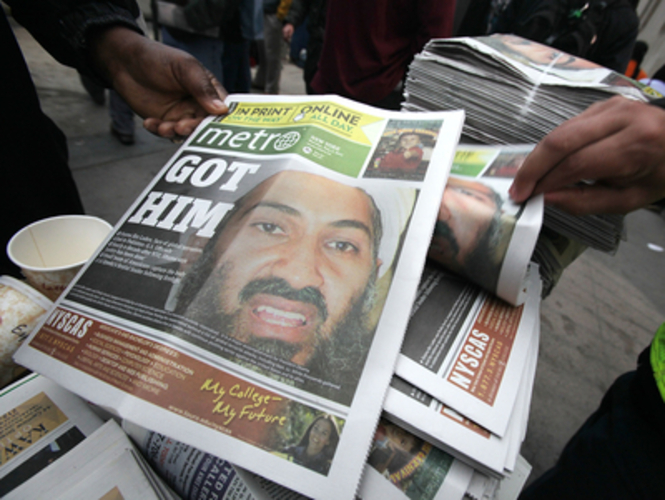 (May 2, 2011) – North American Muslim organizations are reacting to the death of Osama Bin Laden last night.

In a statement, the Islamic Society of North America (ISNA) says that it hopes Bin Laden’s death ‘will bring some relief to all the families, of every faith and walk of life, who lost loved ones on 9/11 and in every other terrorist attack orchestrated at the hands of Osama Bin Laden.’

“ISNA joins President Obama and prays that as the nation continues to heal from the devastation inflicted upon them at the hands of Bin Laden, we will turn to each other today, united, and emerge tomorrow with an even stronger resolve to take every action necessary to protect the precious ideals of our nation that Bin Laden attempted to destroy on 9/11: peace, tolerance, respect, and freedom for all,” said ISNA President Imam Magid.

The Council on American-Islamic Relations, one of the largest Muslim civil liberties organizations in the United States, released a statement following the news in President Obama’s Sunday address.  “We join our fellow citizens in welcoming the announcement that Osama bin Laden has been eliminated as a threat to our nation and the world, through the actions of American military personnel,” the group said.

On a popular American website, Muslimmatters.org, author Yahya Ibrahim wrote that the deviant ideology spawned by Osama Bin Laden continues to be a challenge to Muslims.

“With the killing of Osama bin Ladin comes a great challenge for the Islamic community. His life is between him and His Judge, the Most Aware and Wise,” said Yahya Ibrahim.

“The Islam we know is under siege from within. The weapon is a blunted instrument of deviant  ideology calling to rebellion, anarchy, hatred of all that is not “us,” and a disdain for anything that is “American” or ” Western.” It is a call that is simplistic and bewilderingly callous – kill them, because they killed us. That is not the way of Muhammed sala Allahu ’alihi wasSallam and it will never represent the Ummah,” Ibrahim added.