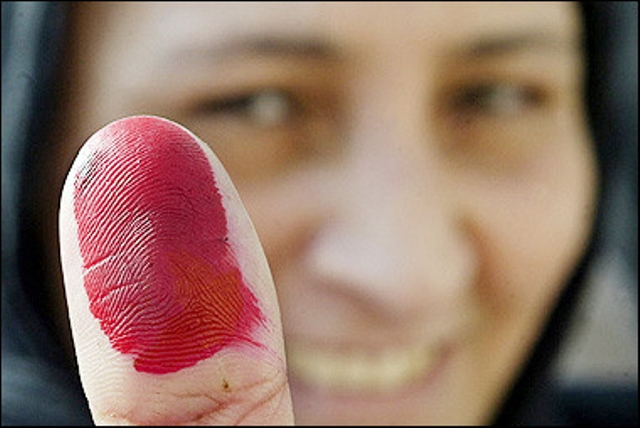 (March 25. 2011) –  I got excited as the plane approached the tarmac. A wide smile overtook my face. I felt more confident about my last-minute decision to travel from New York to Cairo to vote in Egypt’s constitutional referendum.

I was anxious to get out of the plane. Polling stations had opened early in the morning. Egyptians were finally getting their first taste of democracy.

Understandably, many did not see a point in voting. But things have changed.

The 25th January revolution achieved more than just the toppling of the regime; it empowered the people. Interest in politics jumped, evidenced by how much newspaper readership and the number of viewers of political shows increased. The use of the Internet to find information and discuss pressing issues on social network websites doubled, according to a report entitled “Revolution 2.0” issued by the Egyptian technology company Techno Wireless.

The Supreme Military Council is now in charge and proposed six constitutional amendments, including limiting the president’s term to a maximum of two four-year terms. Mubarak was president for 30 years and there was no limit on how many times he could run.

My husband and I were in Cairo for less than 24 hours. We had been watching the debates over the amendments with a mix of joy and pain that we were not going to participate in this historic day. Two days before referendum day, it suddenly hit us: we couldn’t miss it. In a few hours, we booked our tickets, made arrangements for our two kids, packed our bags and headed to the airport.

It was a beautiful sunny day in Cairo. On our way from the airport I remembered the first time I ever voted, in the US presidential elections of 2008. I was overtaken by a powerful feeling that was completely new to me. But it was bittersweet, as that day I also realised what Egyptians were missing.

Voting is addictive. Ever since my first vote, I have participated in every city and state election. I always bring my two kids, now four and six, along with me so they can appreciate and enjoy what I never had.

Democracy in Egypt always seemed like an implausible dream. But a little over two years after my first time voting, here I was heading to a polling station in Cairo to cast my first Egyptian vote. I was overwhelmed with emotion as I saw the long lines. Young and old, men and women, rich and poor people standing in lines that sometimes extended for over a mile to do something most of them had never done before. Eighteen million of the 45 million eligible voters participated.

The people standing in line with us were ecstatic. There was a strong bond between everybody, regardless of their viewpoint.

The Muslim Brotherhood (MB) and members of the former President’s National Democratic Party (NDP) were for a “yes” vote. Others, including many liberals, were in favour of a “no” vote, noting that quick parliamentary elections would advantage the MB and NDP, as new groups would not have enough time to organise.

We had decided to vote “no”. We came closer to the stairway that leads to the voting room on the first floor and saw those who had already casted their votes coming down the stairs with big smiles on their faces, showing off their pink ink-stained fingers, used to ensure voters would not vote more than once.

* Hoda Osman is a New York-based reporter. This article was written for the Common Ground News Service (CGNews).