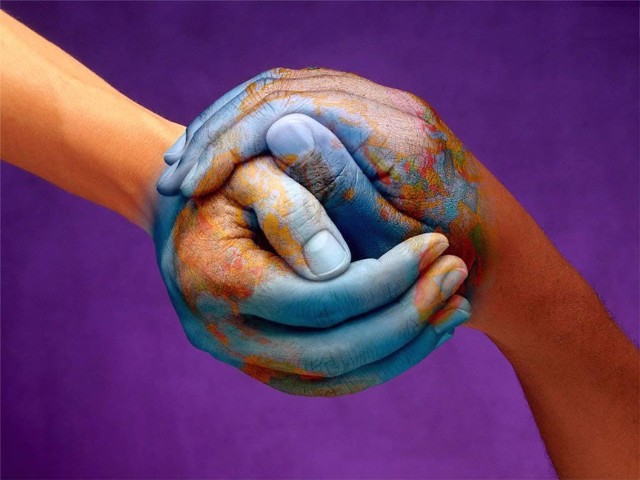 I grew up rural. That’s the important part of this story. I lived in a farming community about two hours west of Chicago. I was a Catholic; Catholicism was my received faith. Some of my friends were Catholics. The rest were from various Christian denominations. We didn’t talk about religion.

When I went to college in the suburbs, I fell away from the faith (I imagine that this happens to LOTS of college students) and continued on my way. Since I was finally in a place with a diversity of religious expression, I quickly realized that my views of other religions (especially Islam) were informed largely by my friends’ parents and their favored false information outlet: FOX News. The realization of my own ignorance pushed me to do some learning on my own.

So despite not being a “member” of any religions, I began spending an abnormal amount of time reading about them. Holy texts, histories, modern epigrams, condemnations, praises, and all other bits and bobs were devoured, and I worked both in class and out of class to connect them to the world around me. I could tell you (almost) anything you’d care to know about the world’s faiths. But I was only creating stale, two-dimensional constructs of religions, completely lacking in movement and life.

My roommate, himself an atheist and a recent graduate of my university, had been hired on in a resident fellowship position with our interfaith center. One day, he convinced me to come along with him as he led a group of students to the local mosque. Up to this point, I’d barely been in other Christian churches, let alone something totally out of the ordinary. I went along, curious as ever. I saw Muslims praying, saying the Arabic words that I had come to know in my studies. Afterwards, a whole slew of people came up to us and welcomed us to the mosque, smiled, asked if we had any questions, and for some strange reason, gave us a bag full of bagels.

I recalled how I used to think Muslims acted and looked – again, think FOX News. Furthermore, and the thing that really set me down the path to interfaith work, was the stunning realization that, far from being stale, two-dimensional constructs, religions were, in fact, full of religious people. These were strangers with hopes and families and fears and joys all intricately bound up in their ideations of God and their ultimate visions of human existence.

I had spent so much time learning the ins and outs of these religions (including the one that I had been born into), I’d forgotten that belief systems are nothing without the people of faith that compose them. I immediately involved myself with a few interfaith dialogue groups and returned to regular church attendance, although now I also made it a point to visit my local synagogue, mosque, both of the city’s Hindu temples, and many non-Catholic Christian churches. I was fed by the Hindus, honored as a guest by the Muslims, asked to turn up the heat by the Jews (it was Shabbat), and had my legs danced off by the African-American Baptists. I joined in prayer with them all.

I was spending my days with other people of faith, widely divergent and historically dissimilar to my own, but with strong points of connection around shared values of service, compassion, and justice. I loved every minute of it. During intense interfaith dialogue sessions, I came to see in greater detail how my own faith-life fit into theirs, and into the world as a whole.

After graduating, I joined the university staff in the role that my former roommate had held. I was a liaison to the faith communities that I had become great friends with, and I worked with them to involve students in dialogue and exchange events. I became convinced of the linkage between personal devotion and action across faith lines. This work led me to graduate studies in international relations, where I investigated the not-always-positive role that faith plays in global politics.

From there it was a short skip and a jump into the Faiths Act Fellowship, an elite program that brings together young people of faith across the world to promote the Millennium Development Goals and the great work that faith-based organizations are doing to “fix” things. The Fellowship is run by the Tony Blair Faith Foundation and the Interfaith Youth Core, two groups doing cutting-edge work in the multifaith realm. I traveled to Africa and saw church-run hospitals and malaria education classes at the local mosque. We asked, “What would happen if, in the developing world especially, these groups were to work together?”

This was the message that we carried back to our home countries. Here in the First World and in the Third World, people of faith do an enormous amount of charitable and earth-saving work. And that’s what drives me today. Interfaith dialogue made me a better Catholic (and a partial Hindu) and interfaith action showed me the power of personal conviction in solving the world’s injustices.

I’ve been blessed to live in a country where religious freedom is of utmost importance to almost everybody, and to meet people from dozens of different traditions. We might disagree on what happens or where we go after death, but we can certainly work together here and now to alleviate suffering, protect our environment, and promote justice.

Tim Brauhn is an interfaith activist commonly found at the intersection of social media and international development. He holds a BA in English from Aurora University, where he represented the university to area religious groups and civic associations. He received his Master of Arts degree in International Studies from the University of Denver’s Josef Korbel School of International Studies. Tim was an inaugural member of the Faiths Act Fellowship. He is the Director of Operations for The 1010 Project, a Denver agency that provides business and entrepreneurial training in Kenya. Tim is also a consultant for humanitarian, social innovation, and general saving-the-world type programs.