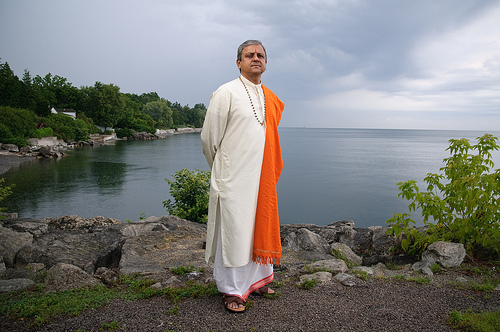 Based on the information that we have reviewed we see no issues with students praying in their school cafeteria as long as such activities are sanctioned by the school authorities.

We of the HINDU FEDERATION extend compliment to all those involved on providing Canadian youths with the opportunity to pray.

In these times when Canadian youths are facing many challenges of poor health habits, substance abuse, gang violence and family issues it is truly comforting to know that some youths are praying and have a place to do so.

I believe that we must try at all times to avoid the sensationalism and sometimes politically motivated actions of a few to disturb the tranquillity of a harmonious entity such as the public school where tolerance and acceptance must be part of the basic educational food that nurtures the young minds of the future leaders of Canada.

I look forward to working with all concerned to bring this matter to a positive closure.

I was very encouraged to read your statement of support of July 18, 2011 in regards to the issue of the religious accommodation of the Friday prayer requirements of Muslim students at the Valley Park Middle School.

On behalf of myself, the Board at the Canadian Council on American-Islamic Relations (CAIR-CAN), staff and volunteers and many Canadian Muslims we very much appreciate your timely and moving message of tolerance, acceptance and inclusion.

The Toronto District School Board (TDSB), to its credit, has taken a very principled stand on the issue and should be commended for this and for the transparency they have shown in their communications.

Unfortunately media coverage has been somewhat slanted on this issue.  Journalists have repeatedly failed to mention the broad coalition that has formed in support of the TDSB position nor have they delved into the track record and credentials of the groups behind this manufactured crisis.  The sins of omission.  The public does not have the full story.

I am writing to you on behalf of the Canadian Islamic Congress to convey our sincere appreciation for the Hindu Federation’s support of the Toronto District School Board in its recent positive statement regarding prayer time and space given to Muslim students at Valley Park Middle School.

Along with your organization, CIC recognizes that the TDSB has acted not only in a humane and generous way toward strengthening interfaith understanding, but also upheld its constitutional responsibilities by ensuring that all students are allowed free access and opportunities to take part in worship as their respective religious traditions require.

It is inspiring and gratifying that people of different faiths and cultures can come together with a unified positive voice to support what is best for our children and our communities.

Thank you for giving public attention to this very important issue.