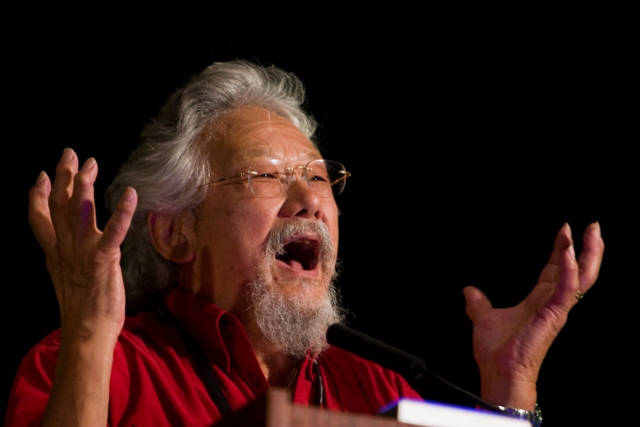 (March 24, 2011) – Last Saturday evening, Muslim Scouts groups in the Greater Toronto Area presented David Suzuki with a birthday cake to mark his 75th birthday which he will be celebrating today, March 24, 2011.

Suzuki came out to the Richmond Hill Centre for the Performing Arts to be the keynote speaker at the event, “A Conversation with Peace Makers of the Earth,” that was organized by five Muslim Scouting groups in the GTA – the 1st AFC Scouts Group, 786 Ismaili Scouts Ontario, 392 Carville Muslim Scouts, 163 IIT Scouts Group and the 65th IMO Muslim Scouts.

The groups are founders of the Canadian Muslim Fellowship of Scouting, a new organization that was launched during the evening’s proceedings.

Suzuki is one of the most recognizable and trusted people in Canada.

For over 30 years he has shown Canadians the wonders of science and nature, and raised the country’s consciousness to the environmental challenges we face.

In the process, he has become one of the most beloved public figures who Canadians trust to give us the straight goods on what we need to know to protect our planet.

“We are animals and as animals, as biological creatures, if we don’t have clean air, clean water and clean soil that give us our food and clean energy from the sun and biodiversity, if we don’t have those things, we’re dead . . . and yet we use air, water and soil as a garbage can,” David Suzuki told a captivated audience.

Local politicians, Scouts Canada executives and leaders, environmental organizers and Muslim community leaders were in attendance and met briefly with Suzuki prior to his lecture.

His message was both inspiring and motivating for the audience.

“Dr. Suzuki’s conversation was absolutely inspiring!” said audience member, Anela Jadunandan.  “I am sure many people left the event feeling that we have to do more to ensure that our children and grandchildren are left with better air, water, food, etc.”

Suzuki was born in Vancouver but his family moved out to London, Ontario.

He started his career as a scientist in the 1960s but it wasn’t until he read a book by Rachel Carson, the Silent Night, that he was inspired to become active in the environmental movement.

Rachel Carson’s book warned about the harmful effects of pesticides and led to the birth of the modern environmental movement.

During his keynote address, David Suzuki said that the forces of economics are taking over concerns about nature and the atmosphere that keep people alive.

It was announced that the Canadian Muslim Fellowship of Scouting will engage in a cross country campaign to expand Scouting in the Muslim community.

“Tonight, we are pleased to announce the launch of the Canadian Muslim Fellowship of Scouting (CMFoS) which will use Scouting, Canada’s foremost character development program, to engage youth in citizenship, service and leadership activities,” said Muneeb Nasir, speaking on behalf of the organization’s Board of Advisors.

Nasir told the audience that there is an urgent need for alternatives to engage the large and growing numbers of young people in the Muslim community.

“We are seeking an antidote to any possible influence of the conveyors of extremist ideology on the Internet where youth spend more and more time,” he added.

Early in the evening, Jessica Page of the Scouts Canada Board of Governors welcomed the audience on behalf of Scouts Canada and Dawood Zwink, Community Development Worker with Scouts Canada introduced David Suzuki.

The David Suzuki Foundation is asking Canadians to honor David Suzuki on his milestone 75th birthday by supporting the Foundation’s mission for a healthy planet by making a donation or set up a fundraising page and invite friends to raise funds.