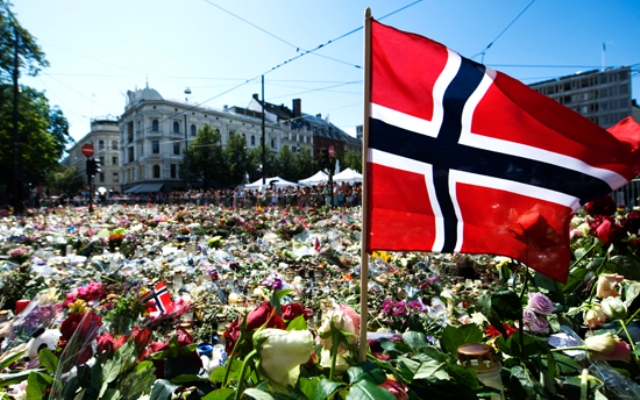 A young Norwegian has killed dozens of innocent people.

Many thought at first—quite naturally these days—that we had witnessed a new Muslim terrorist attack.

But in Norway, the massacre came as both a shock and a wake-up call.

A fundamentalist Christian had murdered his fellow citizens because he believedNorway’s political parties (as well as its self-styled centrist politicians) were betraying the country’s values and culture.

By accepting new immigrants and allowing Muslims to settle in Norway, he claimed, they were—as in so many European countries—destroying Europe’s Christian roots.

So he acted to raise awareness, to try to halt the silent “colonization” of the West.

One day before the attack, he had posted on the Internet a Manifesto filled with Canadian, American, British and French references to the new threats called “immigration,” “Islam,” “the other,” and non-Westerners in general.

Some Western Muslims, in Europe or America, were simply relieved that Islam was not involved.

Some were even happy to point out that Christians can be terrorists as well, as if we were competing to see who is worst: a bizarre attitude.

Instead, we should be sending our sincere condolences to the bereaved families and to the Norwegian population as a whole.

What happened is unacceptable; it is our duty to side with the victims of any terrorist attack.

Killing civilians and innocent people can never be justified.

Whether the perpetrators are Jews, Christians, Muslims, or anyone else, such acts must be condemned in the strongest words.

These are sad days indeed.

Norway is a peaceful country, unaccustomed to such violence.

I want here to pay tribute to all those who died and to condemn these barbaric acts.

Who is to blame?

The populist and extreme right-wing parties in Norway, as well as in Europe and America, were quick to condemn the killer’s horrible act and to dissociate themselves from it.

Timely words, but are they enough?

If a young fundamentalist Christian was ready to kill to save his religion and his culture, as he sees it, it is because—for the last ten to fifteen years—he heard, day in day out, that both were in danger.

Populist parties are propagating the idea that immigration is destroying the West and that Muslims are not truly Western citizens, even after three or four generations.

Equally worrisome has been the attitude and the rhetoric of the traditional parties, from the right as well as from the left, as they very repeat, and thus confirm, the substance of the populist line.

In fact they implicitly, and even very explicitly, especially at election time, agree that immigration, Islam and security are the three main problems facing the West.

Even though they distance themselves from specific extremist views, they clearly view Islam as a “problem” and not yet a European or American religion.

By repeating that integration has failed, that Muslims are retreating into ghettos, that multiculturalism is the wrong choice or by associating the presence of Muslims with the immigration threat they create a toxic climate, which is conducive to the growth of racism and extremist views.

The great majority of politicians from the traditional parties, the populists as well as numerous “progressive” intellectuals, can no longer speak and behave today as if they have no connection with the extremist actions of some fundamentalist or extreme right-wing groups.

Western intellectuals must also assume their responsibilities: they have been active agents in creating the sickening atmosphere that is sweeping over the West.

But it would be too easy to blame the Tea Party and the Neo-conservatives in the United States, the Conservative Party in Canada, or the populists of Europe if we did not scrutinize the rhetoric of politicians and intellectuals eager to spread biased and simplistic views on Islam, racist statements, hatred of Muslims, or xenophobia as if it was normal to do so, all because Islam and Muslims are such an easy target nowadays.

It is normal, and even healthy to criticize Muslims, but it is quite disturbing to see intellectuals, politicians and journalists focusing on the “Islamic factor” as if it explained all our problems.

Instead, they overlook real socioeconomic and political issues such as unemployment, social injustice, discrimination and skewed urban and social policies.

They support policies based on fear and then expect their hands to remain clean after an extremist kills innocent people because he has absorbed this very fear.

A self-critical position would be more than welcome – imperative, in fact.

It is time for Western Muslims to stand up, to be vocal and to refuse to be treated as second-class citizens.

Instead of seeing themselves as the victims, instead of marginalizing themselves, they should be an integral part of mainstream social, political and economic debates. Islam is a Western religion, that’s a fact.

The issue of immigration is another discussion, one that requires a vision for the future.

No Western country can survive and prosper without the support of new and young immigrants in the work force.

It is clearly not by pandering to fears that the problem is going to be solved.

A climate of fear would only leads to isolation and/or fragmentation within the society, and eventually to violent and extremist behavior.

The choice is ours: we can use wisdom, or become (explicitly or implicitly) populists.

Some intellectuals can make a name for themselves; politicians can win the next election by surfing on people’s fears and sense of loss.

But they will surely be forgotten by History.

Others are prepared to face prejudices, racism and xenophobia with courage and commitment.

They are the visionaries our contemporary times need even though a majority of people is still not aware of it.