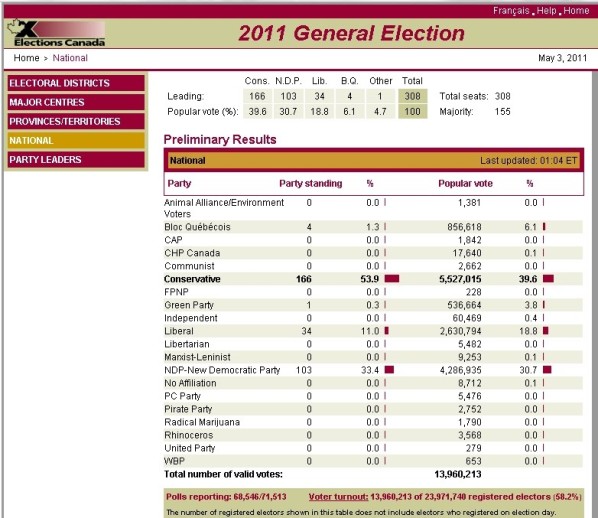 (May 4, 2011) – I predicted it from the beginning, even on the day the election was called, but no one would believe me. Harper finally got his long coveted majority with 167 seats in Canada’s Parliament.

But given the fact that 31 of the 34 major news outlets in Canada endorsed Harper, the outcome of the May 2nd election is not surprising.

Yes, many groups and individuals used online social media – twitter, facebook, youtube, blogs, listservers – to become engaged in this campaign, but the fact remains that the vast majority of Canadians still rely on TV and the mainstream press to find information to assist with formulating their opinions.

This is why such people remain un-informed regarding many of the important issues facing this country or get presented a one-sided view at best.

Nevertheless, 60% of those who voted said no to a Harper government. Furthermore, the social democratic NDP now has 102 seats (60 from Quebec alone) in Parliament while the Liberals have been kicked out of official opposition status with a measly 34 seats.

The Bloc has been decimated with 4 seats and leader Gilles Duceppe has been left standing in the unemployment line while Green Party leader Elizabeth May has finally gained a seat in Parliament.

Michael Ignatieff announced he is stepping down as Liberal leader. Will this pave the way for Justin Trudeau to be the new Liberal party leader?

The sad news is that voter turn out was still abysmally low with only 61.4 per cent of eligible voters casting their ballots.

This is the third lowest voter turnout in Canadian history and is completely unacceptable.

Incidentally, the highest voter turnout in Canadian history was 79.4 per cent which took place in 1958 when Progressive Conservative John Diefenbaker won his massive majority.

This means that many people remain disenchanted with our political system.

But it is important to remember that, as Tim Harper noted in the Toronto Star, Harper won “not by inspiring Canadians, but by proving to be a superior political tactician,” and that he “brazened his way to a majority by demonizing the man he saw as his real threat.”

It is hoped that with the NDP now being the official opposition it will hold the Harper government accountable and speak for the majority of those Canadians who said no to Harper and his message of social and political conservatism.

One local activist e-mailed me this morning and wrote, “I can’t see Harper paying any attention to the opposition — he hardly bothered when he had a minority. The NDP will be a buzzing fly to be swatted here and there.”

Elizabeth May noted that, “This is definitely going to be a much more aggressive and unrestrained government.”

And here is what the Globe and Mail, which endorsed Harper, writes on May 3rd, “Stephen Harper will put this new-found authority to immediate use. …(A majority government) gives him four years to pursue his policies as he sees fit without having to shelve long-term plans every few months in case his rivals might defeat him. …He will be able to schedule government spending cuts over four years… it may also give him leeway to cut payments to provinces if his promise to keep health transfers rising at 6 per cent annually puts too much pressure on Ottawa’s coffers… say goodbye to the long-gun registry and $2-per-vote subsidies for political parties… And get ready for term limits on senators and greater foreign ownership of companies that offer telecom services such as cell phones. …The Tories will also be tempted to kill the Canadian Wheat Board’s monopoly over selling Western Canadian grain…”

Writing for Rabble.ca, Tina Donaldson voices her concerns when she writes, “With his coveted majority in place, Harper will now have free reign to do as he pleases. What will he do with this new-found power? I am filled with fear by what a Conservative majority will mean for the issues I care about.”

I think what Tina says resonates with a lot of us here in the Muslim community.

We are well aware of what Harper has done yet we have yet to see him operate with a majority.

It is to the NDP party, under the leadership of Jack Layton, that our community will now be looking to address our concerns in the days ahead as the Liberals have utterly failed to be nothing more than a right-of-center party which does not appeal to us or the vast majority of Canadians.

The NDP can learn an important lesson here, don’t alienate your supporters but truly listen to their concerns.

Layton stated on election night that he “always favoured proposition over opposition. But we will oppose the government when it’s off track. I will propose constructive solutions focused on helping Canadians.”

We must hold Layton accountable to his promise.

This election has shown, with the large surge in NDP popularity, that people want real change as well as the Harper government to be held accountable. It has also shown the importance of supporting alternative media which provides a counter narrative to what Canadians are receiving from the pro-Conservative mainstream media.

Ultimately, however, real change will come about at the grassroots level where people and communities begin to work together.

One of the major changes we need in this country is electoral reform where a system of proportional representation is adopted.

In a May 3rd press release byfairvote.ca, it was noted that the “federal election results showing that the outcome does not accurately reflect the way Canadians voted.” “The Conservative party increased their vote percentage by less than two points,” stated Fair Vote Canada (FVC) President Bronwen Bruch, “but this allowed them to win 24 more seats than in 2008, when they were already over-represented. Stephen Harper calls this a ‘decisive endorsement’, but we call it a rip-off.”

The press release went on to say that with the final results, the Conservatives have won 54.22% of the seats with only 39.62% of the votes, and that with the current winner-take-all voting system, the NDP is now over-represented by seven seats while the Liberals lost half their seats even though their vote percentage fell by less than 8%.

Thus we can see that the outcome of the election is still not a reflection of the voices of Canadians due to the blatant flaws in the current electoral system.

While I was writing this article I received an e-mail asking me, “Now that Conservatives will be governing for 4 years, How (and if) do Muslims engage with them?”

This is a very important question which needs to be addressed because as things stand right now the Harper government has not been too friendly to our community and has in fact alienated us.

There are positions he takes on a number of issues – foreign policy, blind support of Israel, immigration, etc – that Muslims find totally unacceptable.

But it is important for our community to become engaged in the political process – whether in parties or at the grassroots level – otherwise we will be left behind.

It is interesting to note that many gains for the Conservatives came in the so-called 905 Toronto heartland region, where they made major inroads with new Canadians. What should that tell us?

Layton stated at a victory party at the Metro Convention Centre in downtown Toronto that, “A country worthy of the hopes and dreams of those young Canadians who said no to the same old cynicism, to the negativity, to the politics of usual and they said yes to a Canada where anything is possible, where we all stick together and no one is left behind.”

Well, Mr. Layton, in the wake of this election decision we are feeling left behind and can’t help wondering what our future is in a social and political environment which is becoming increasingly hostile towards Muslims.

The next federal election will be in October 2015. Until then we have a lot of work to do.

No longer can we afford to be mere spectators in this democracy.

We must become engaged and fight for the Canada we want.

##
Yahya Abdul Rahman is a community activist in Ottawa, ON. Visit his blog at:yahyaottawa.blogspot.com