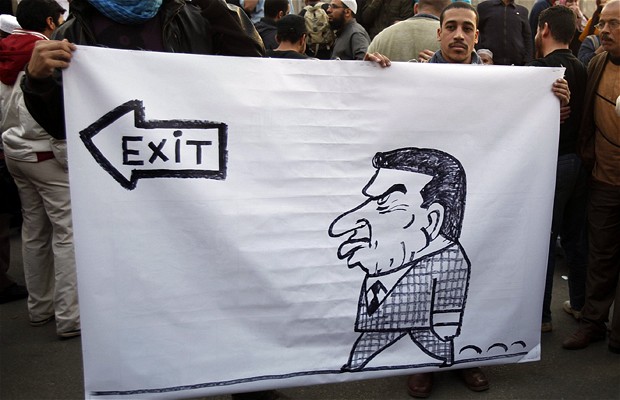 When I was a little girl, my grandfather told me a story about a scorpion who wanted to cross a river and asked a child to carry him across.

The child recognized that this was a scorpion and dangerous and was afraid of being stung, but the scorpion reassured the child that it would not even think about stinging because if he did sting, then they would both drown.

The child decided to trust the scorpion and let him ride on his back to cross the river.

The child got about half way across the river when the scorpion stung.

The child asked “why??” and the scorpion said:  “What did you expect,

I’m a scorpion; it’s my nature.”  They both drowned.

Today, Hosni Mubarak gave a speech calling the Egyptian people his children, and saying that he has no intentions of stepping down, and that they should trust him to do the right thing and meet their demands, just not right now.

Hosni Mubarak, the scorpion, is hoping that the Egyptian people are so worn down by 30-years of oppression that they will act like children and trust that it is possible for a scorpion to go against his nature.

He may be a father figure, but it is an abusive and dangerous father figure, and one who would rather tear apart his family than give up his authority.

The Egyptian people are not children!  They are brave and heroic people who have stood up for the last 17 days and demanded an end to tyranny and injustice.

They have had 30-years to see what Mubarak is, and that is a scorpion not a father.

The Egyptian people are more likely than others to be able to recognize scorpions because in Egyptian mythology, the scorpion was the symbol of Seth, the Trickster and brother of Nephthys, queen of the Land of the Dead.

Seth was the enemy of the hero Osiris, and Isis the Magician.

Seth caused the death of his brother Osiris by tricking him into “trying on” an irresistibly gorgeous coffin.

What Mubarak is offering is a coffin for freedom and democracy.