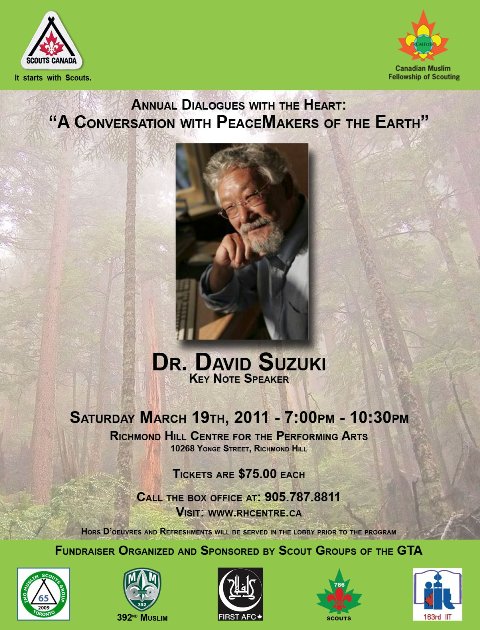 [Remarks delivered on March 19, 2011 at the event, Dr. David Suzuki – “A Conversation with PeaceMakers of the Earth”,  organized by the Canadian Muslim Fellowship of Scouting, Scouts Canada and Scouts Groups of GTA]

We are excited to have you here tonight at this benefit event to launch a major cross country campaign to engage Muslim youth.

Canadian Muslim communities are searching for viable and effective programs to help children and youth cultivate enduring values that last a lifetime.

The Canadian Muslim leadership has recognized that there is an urgent need for alternatives to engage the large and growing numbers of young people in its community.

We are seeking an antidote to any possible influence of the conveyors of extremist ideology on the Internet where youth spend more and more time.

Tonight, we are pleased to announce the launch of the Canadian Muslim Fellowship of Scouting ~ CMFoS ~ which will use Scouting, Canada’s foremost character development program, to engage youth in citizenship, service and leadership activities

The Canadian Muslim Fellowship of Scouting (CMFoS) is an auxiliary and booster organization designed to attract human and financial resources in support of this major campaign.

The organization is being launched tonight with eight allied Groups and approximately 350 Scouts Canada members.

Scouting has been selected as the program of choice to engage young people in our faith community because of its brilliant principles, mission and practices.

Muslims believe that a successful life is one in which we develop and nurture meaningful relationships with God, ourselves, our fellow humans, and nature.

The relationship with God is in the meaning of the word, Islam itself – Islam is the continuous effort to submit and surrender to God and thereby achieve peace.

The three broad principles which represent Scouting’s fundamental beliefs Duty to God, Duty to Others, Duty to Self  resonate with Muslims and has made the Scouting movement attractive over the last century in the Muslim world.

Indeed, throughout the world, Muslim communities have enthusiastically embraced the Scouting movement.

Today, there are 28 million Scout members in 217 countries – about one third are Muslims.

Through this new organization, Canadian Muslim Fellowship of Scouting, Canadian Muslims are announcing tonight that we will enthusiastically embrace Scouting to engage young people in our faith community.

We are doing this because,

This approach of learning by doing, commitment to the values of doing one’s best, contributing to the community, respecting and caring for others, and the environment reflects the Islamic principles which promote a strong ethic that encourages engaging in good deeds and giving of oneself.

From a Muslim perspective, a believer in God cannot be just a spectator.

Faith and righteous deeds are intertwined in the religious texts:

Prophet Muhammad, peace be on him, said:

“He who is not merciful to people, God will not be merciful to him.” (Prophetic tradition, Bukhari and Muslim).

In the Qur’an, God says:

“By (the Token of) Time, Verily Man is in loss, Except such as have Faith, and do righteous deeds, and (join together) in the mutual teaching of Truth, and of Patience and Constancy.” (Qur’an 103).

The Muslim community will greatly benefit by being part of this major movement of Scouting that is devoted to children and youth, and, in turn, Scouts Canada will be enriched by growing its membership in this faith community.

We are honored to have such a distinguished Canadian as Dr David Suzuki deliver the inaugural lecture tonight as we announce this major cross country campaign to engage young people in the Canadian Muslim community.

In Islam, we always begin any act by invoking God’s Mercy and Beneficence – so tonight, on behalf of the founding Board of Advisors, we are pleased to launch the Canadian Muslim Fellowship of Scouting with the righteous words — In the Name of God, the Merciful, the Mercy Giving.

In conclusion, the tragic events and upheavals around the world remind us of our vulnerability and of the fragility of life and the environment — our thoughts and prayers are with the people of Japan.

In these times, it requires us to join in fellowship and support each other and seek God’s Peace, Mercy and infinite Generosity.

A prayer of Prophet Muhammad, peace be on him:

O God! You are Peace, and Peace Comes from You; Blessed are You, O Possessor of Glory and Honour.

I leave you with Peace, Ma Salaama.