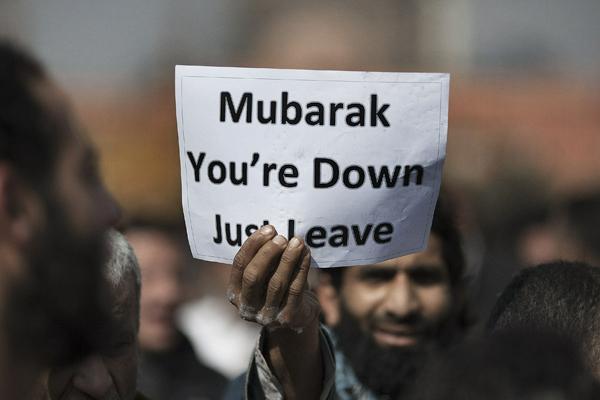 We have reached a turning point.

It is clear now that it dictators can be peacefully overthrown!

To do so takes courage, a mass movement, determination and hope; faith in God and/or in the future.

Crushed by repression, the people have stood up to claim full human dignity.

Their irrepressible right is to be free.

The Tunisians have blazed the trail.

In Algeria and Mauritania, then in Yemen and Egypt women, men and young people of all backgrounds have taken to the streets to express their anger and frustration, their intense desire to see their respective regimes fall.

Sparks are flashing everywhere; demands being drafted; protests have occurred even in Syria where the government has announced a series of reforms should the people begin to consider mass action.

In Egypt, tensions have been growing over the last few days.

After thirty years of unshared power – having imposed a state of emergency after the assassination of Anwar al-Sadat in 1981 – Mubarak and his regime now face the people’s defiance of his authoritarianism and bloody repression.

The police and paramilitary force have beaten, arrested, tortured and fired on the crowd; hundreds are dead, thousands injured.

It was to be expected.

Egypt is not Tunisia, and its regime knows, when it comes to its alliances and its geopolitical situation, that it enjoys full Western support.

Of course, the Obama administration and Europe are calling for the people to have the right to demonstrate but at the same time, support for the regime and the imperative of regional stability remain priorities that can neither be ignored nor minimized.

Nothing will take place in Egypt or in the region as a whole without the United-States (and indirectly Israel) attempting to control or, at minimum, to direct the developing situation.

It is difficult to imagine that Washington will drop President Hosni Mubarak, but if resistance and calls for his overthrow grow strong enough, and appear to be gaining momentum, there is every reason to believe that they will be deeply involved in drawing up alternatives.

American, European and Israeli strategists are already studying scenarios in which the Egyptian president loses control of the situation.

His overthrow in the short term seems unlikely, but anything is still possible.

Whatever the short-term outcome, Washington and Tel-Aviv prefer to play a “win-win” game: either a weakened president (whose policies they could then determine), or a compliant regime that they will have set up behind the scenes.

Nothing has been settled.

The process of democratization will be a long and painful one, full of obstacles and pitfalls.

Egypt’s rulers, like their Tunisian counterparts, have been brandishing the “Islamist threat”, pointing to the “active presence” of the Muslim Brotherhood among the demonstrators.

Its members are the very people who were first arrested in an attempt to convince the public that they were behind the popular upheaval.

No one can deny that the organization, illegal today, remains a significant factor in the opposition movement.

But it is not taking a leading role, and does not represent the majority of those confronting the Mubarak regime.

While we must scrutinize and remain critical of certain of the Brotherhood’s positions, as well as those of other legal and non-violent Islamist groups, these organizations have abjured violence and have developed new policies on democracy, women and civil society.

Turkey has demonstrated that Islamists have been able to deal with these issues in a responsible way.

Any democracy worthy of the name must allow all components of society that reject violence and accept democratic norms for all – before and after elections – full freedom of expression, and participation in the political debate and in elections.

For geopolitical and security reasons, not to mention the Israel-Palestine conflict, it would appear that true and transparent democracy, free of corruption and manipulation, is not on the immediate agenda for Egypt.

Everything will be kept under control even if a more open regime than Mubarak’s (which is devoutly to be wished and supported) were to emerge.

The people will decide whether to keep up the fight for its rights and its dignity.

From our vantage point in the West, our obligation is to follow closely and lend our support to popular movements in Africa, North Africa, the Middle East and Asia as they reject dictatorship and repression and seek to live free. It is our moral duty.

We must demand no less from our governments.

Barack Obama was presented as an alternative to George W. Bush and his bellicose, neo-conservative administration.

Expectations were high that he would introduce new methods and policies.

That happened at the rhetorical level (and in a handful of spectacular cases) on both the domestic and international fronts, with his remarkable speech in Cairo on June 4 2009, promising a new era.

If the election of Barack Obama made it possible to break down, symbolically, the ancient barrier of racism in the United States – with the election of the first African-American president (which has remained little more than symbolic) -, we are still waiting for him to break down the barrier of American and European blindness toward the Arab world and toward the planet’s Muslim-majority nations.

Time has come to stand up for the principles of justice and liberty, of true democracy and respect for peoples rather than pay only lip-service to democratization and popular outrage while political systems remain hermetically sealed and collaboration with dictatorial regimes has become an open secret.

Such would have been the true achievement of the Obama era – to respect peoples in deed and not simply by a change in tone, with fine words.

It may still be too soon.

If we look closely at the world as a whole, and at Africa and the Middle East in particular, we see that the center of gravity in international relations is shifting.

With apparent slowness, depending on electoral deadlines in the United States or in Europe, but at the same time with striking rapidity when measured against History and the transformation of societies.

The rising powers of China and India, as well as Asia generally (not forgetting Latin America and the Global South) are now firm fixtures on the world’s political and economic landscape.

None of these powers bears the West’s historic burden, nor do they entertain the same relations and prejudices toward the Arab world and the Muslim-majority societies.

Their relations with Israel are far removed from those of the United States and the European countries.

The West cannot continue to mislead itself without significant costs, it can no longer dig in its heels, cannot continue to choose its friends on the basis of geopolitical and economic alliances at the expense of the most elementary human principles.

The continued shift of power and influence away from the United States and Europe is likely to increase their isolation, and that of Israel.

This will happen not because the growing influence of the emerging powers, but because the governments of the United States, like those of Europe and Israel, have continually chosen to place their economic, security and strategic interests above their declared human principles.

One day the wheel of History will turn; new forces will arise and overturn existing power relationships, reminding the mighty of yesterday that they should have used their power in a different way.

It will be a lesson that far too many leaders and governments, drunk on their power – whether dictatorial or democratic – will, unfortunately, learn too late.