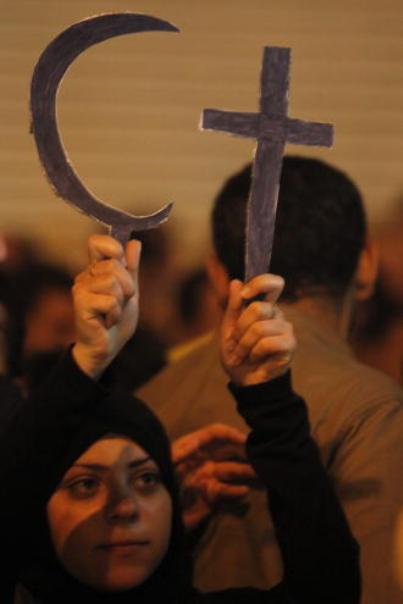 In April 2006, hundreds of Egypt’s Alexandrian Christians gathered to mourn the death of 78-year-old Nushi Girgis, a Christian who was stabbed at St. Mark and St. Peter’s Church during one of a series of attacks on churches in the city that year. As the crowd walked down the street, chanting religious hymns, people began throwing stones from their balconies. The scene quickly turned violent, pitting Muslims against Christians.

Four years later, although largely invisible, the tension still looms. We saw a resurgence of violence last week with the bombing of the same St. Mark and St. Peter’s Church, which took 23 lives and injured many more people. Egypt’s Coptic Christian families worry about their lives in a nation that has become a contested home. The current wave of violence could mark a crossroads for this community with regard to its sense of political engagement which, for a long time now, has been dormant.

The government is currently trying to wipe out the mounting tension by deploying a discourse of national unity and describing the aggression against the Christian minority as coming from outside the nation. Al Qaeda’s recent threats against the Christians of Egypt have given some resonance to this claim.

But this state-engineered discourse is not resonating among the country’s Christian community, whose increasing bitterness is fast becoming politicised. In the past two days, protesters denouncing the attacks have taken to the streets, vehemently speaking out against Mubarak’s regime and its security apparatus for their consistent failure to protect the nation’s Christian community.

Their mounting anger also stems from a feeling that the regime is actually responsible for fuelling sectarianism. In Alexandria, for example, there have been many indications of the state supporting certain extremist Salafi groups that have spoken with hostility toward Copts on their television programmes and in mosque sermons. The state has allowed them to informally organise in some of the city’s mosques, perhaps as a way to counter growing secular opposition to the regime in the coastal city.

While Coptic anger should not be misinterpreted as a sign of overall political dissent, the act of taking to the streets frames the tension along clear political parameters. This is particularly interesting given the decades-long state-engineered process of trivialising politics amongst citizens by co-opting religious institutions, such as the Church, by giving it full authority over the religious and social aspects of Egyptian Christians’ lives in exchange for preaching de-politicisation. This has consequently led to the Church playing a large role in Egypt’s Coptic community, encouraging its members to congregate, to become isolated and to direct concerns to religious authorities as opposed to civil leadership, resulting in a decreased interest in politics over time.

The anger generated by recent events has the potential to reverse this political apathy amongst Egypt’s Copts and could result positively in renewed civil engagement. The fact that their anger is directed towards the regime, as opposed to their fellow citizens, is healthy and could lead to greater solidarity between fellow Egyptians of all faiths.

Already these tragic deaths have moved thousands of Egyptians – regardless of faith – to change their Facebook profile pictures to an image of the crescent surrounding the cross, symbolic of the fraternity between the two religions. Various initiatives are calling for Muslims to accompany Christians to Christmas mass on 6 January, preceding Coptic Christmas which is celebrated on 7 January, and to shield them against any possible aggression.

Yet, the most crucial way that Muslims can show their solidarity with Christians is to take a political stance against the regime’s divide-and-rule tactics. While it is difficult to imagine that the current tensions – which are right now taking place along religious lines – will soon be secularised, recent events can at least showcase how the state’s constant stifling of freedoms is only breeding dissent. The state must forgo old tactics in order to make space for concessions. This is a moment that should be seized by Christians and Muslims alike.

* Lina Attalah is Managing Editor of the Al-Masry Al-Youm English edition in Egypt and covers issues of migration, refugees, border conflicts and minorities. This article was written for the Common Ground News Service (CGNews).