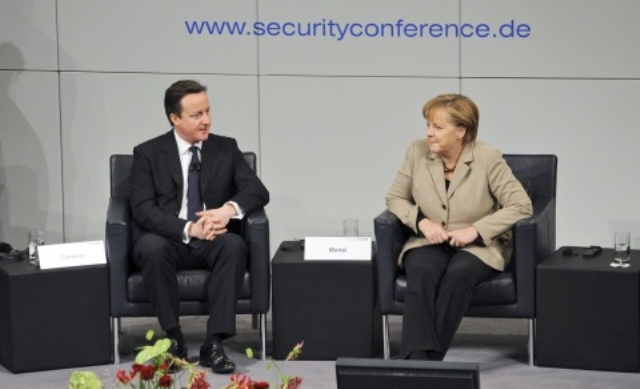 (February 16, 2011) – Following the lead of German Chancellor, Angela Markel, British Prime Minister David Cameron took a stab at the multiculturalism debate during a recent speech on extremism at the Munich Security Conference.

Like the Chancellor, who was sharing the stage with him, he too concluded that multiculturalism had failed in Britain and identified it as a catalyst to extremism.

While Markel only implied that Muslims were the culprits, Cameron stated this quite frankly.

Perhaps it was the 6-hour lunch with the Chancellor that led the PM to make such accusations, but it is quite clear that he feels Muslims in Britain aren’t British enough.

In his simplistic attempt to point out the cause of extremism amongst British Muslim youth, he blamed state sponsored multiculturalism which encourages people to live separate lives instead of assimilating with the mainstream.

David Cameron’s conclusions are flawed on levels too many enumerate.

To begin with, the accusation that British Muslims live isolated lives and aren’t a part of the mainstream is completely absurd.

Muslims have been a part of Britain since Victorian times and have especially played an active role in society over the last half century.

From cricketers like Naseer Hussain to musicians like Yusuf Islam, there isn’t a walk a life that Muslims have left untouched.

Peter Sanders explored this very theme in his exhibit, ‘The Art of Integration’, something I would strongly recommend for David Cameron.

Another thing Mr. Cameron overlooks is our natural inclination as human beings to cling onto people with shared values, customs and beliefs.

Just like goths hangout with goths and homosexuals thrive in designated parts of the city, similarly, Muslims too have a subculture that they find easier to relate too.

Would the former groups be the next ones to be accused of not integrating into wider society?

British Muslims have their own unique identity and to dismiss this as separatism is simply injustice.

While preaching for liberal democratic values, the British Prime Minster wants to eradicate individualism and wants to everyone to be a part of the mainstream?

Am I the only one seeing the irony in this?

While I would agree that isolation from the mainstream community is the type of the environment that would fuel extremism, I disagree that this isolation exists because of a lack of shared national values.

It exists because of the constant dehumanization of Muslims and uninterrupted bigotry that they are faced with.

It is because of movements like the English Defense League and politicians like Geert Wilders whose sole aim is to spread fear mongering.

As a result of this prejudice and constant stereotyping in the media, anti-Muslim sentiments have become increasingly acceptable in the UK.

When society as a whole sees you as the ‘other’, it is only natural for you to isolate yourself from society.

It’s perplexing to see the Prime Minister of a country as old as Britain, with its rich history and timeless legacy, questioning national identity.

This is a reflection of the insecurity felt not only in Britain but all across Europe.

With David Cameron’s strong nationalistic tone and a call for assimilation into mainstream society, it seems like he won’t settle for anything less than Muslim women taking on the Union Jack for a headscarf.