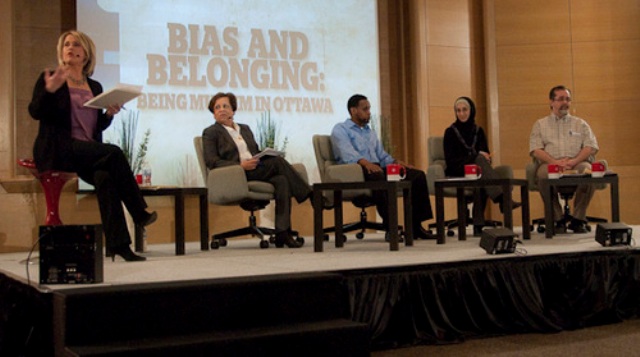 (April 23, 2011) – Canadian Muslims, used to frequent distortion in the media, were invited to have their say in a recent meeting arranged by CBC Radio.

“Bias and Belonging: Being Muslim in Ottawa” Town Hall filled the hall on March 15 but enabled only a few Muslims to express their thoughts. While other Muslims had been invited to speak of experiences on the radio prior to the meeting, the town hall on the whole served to underscore the difficulties and biases that Muslims encounter with the media.

Moderator Lucy van Oldenbarneveld started by reminding us that she had had other such town hall sessions before with Ayaan Hirsi Ali and Tarek Fatah.

Ayaan Hirsi Ali is a Somali who renounced Islam and has been denouncing it through books and media appearances. On the other hand, Tarek Fatah, a journalist who formed the Muslim Canadian Congress in Toronto, doesn’t attack Islam. He lashes at “Islamists” and mainstream Muslim organizations for not denouncing terrorism, even though Muslim organizations have done that again and again.

The moderator quoted Richard Fadden, former director of Canadian Security and Intelligence Service, as saying some second and third generation Canadian Muslims are rejecting Canadian values and embracing radicalism. In asserting that three Ottawa men have been charged and 11 Toronto men found guilty of associating with terrorism the moderator sought answers from the panel.

Aisha Sherazi stated that oppression elsewhere has an impact on Canadians. Mohamed Sofa said that youth here are excluded from the mainstream and are frustrated. Yahya Abdul Rahman declared that true Muslims oppose violence. Salma Siddiqui affirmed that fundamentalists and groups such as the Muslim Brotherhood and new Islam are producing hate in Canada.

The panel offered few insights on why Muslim suicide bombers are killing themselves and innocent people in Muslim countries and why extremists, including Canadian-born or raised Muslims, are targeting innocent non-Muslims.

Salma Siddiqui, in blaming radicals, said that the Muslim Association of Canada, which owns Ottawa’s Abraar School, follows Muslim Brotherhood founder Hassan Al-Banna’s teachings and that’s a problem. Neither the panel nor the moderator asked her to explain how MAC’s admiration of Muslim Brotherhood was a threat to Canada. Abraar School is highly respected and MAC operates in 11 Canadian cities and is devoted to “establish an Islamic presence in Canada that is balanced, constructive and integrated though distinct, within the social fabric and culture of Canada.”

Yahya Abdul Rahman did say that liking or disliking Hassan Al-Banna’s teachings is not illegal in Canada. But the meeting raised a cloud, with veiled innuendos and without any evidence of wrong-doing, against a national Muslim organization.

The discussion then turned to the perception in Canada that Islam relegates women to second-class status. The moderator asked why women can only pray on the second floor of the Ottawa Muslim Association mosque and not with men in the main hall. Nobody from the panel explained that it is compulsory only for men to pray on Fridays in the mosque and only they are urged also to offer congregational prayers in the mosque, if possible. Aisha Sherazi said that men and women enjoy equal rights while Yahya Abdul Rahman stated that Islam does not prohibit women from leading prayers. Some women in the audience declared that they pray upstairs because the main hall is crowded and that even men pray in the basement. They stated that they praying alongside men would detract from
praying.

The Town Hall was on “Bias and Belonging: Being Muslim in Ottawa,” but only “bias” was discussed. Many successful Muslims could have explained what “belonging” means to Muslims in Canada – Senators (two Muslim women), a Member of Parliament (one Muslim woman), a Member of the Ontario Legislature from Ottawa,
the former Chief Statistician of Canada, the former Procurement Ombudsman appointed by Parliament, a former university president and winners of Canada’s highest awards such as Haroon Siddiqui, a respected journalist. They weren’t invited. The discussion focused on Muslims as a problem but ignored their contributions to Canada.

The panel also did not discuss racism which Somalis, and black non-Muslim Canadians, say hounds them. Such people have difficulty in getting jobs and numerous Muslim youth are in detention centres. A report by the Canadian Centre for Policy Alternatives and the Wellesley Institute states that visible minorities have a higher unemployment rate and are also paid less than whites for similar work.

The TV report about the meeting lasted a minute or two. It did not quote Yahya Abdul Rahman’s statement that most Muslim organizations condemn terrorism but are wrongly accused of remaining silent, Aisha Sherazi’s comment that faiths do not promote hate, Mohamed Sofa’s assertion that Canada is “our country, we need to build it,” or Ottawa Police Chief Vern White’s statement when the moderator asked him to speak that the media are creating divisions in Canada.

Perhaps the evening’s most profound observation came from Shamima who identified herself as a young Canadian Muslim. She said that the only bias that is acceptable in Canada these days is Islamophobia.

Mohammed Azhar Ali Khan is a retired Canadian journalist, civil servant and refugee judge. He has received the Order of Canada, the Order of Ontario and the Queen’s Golden Jubilee Medal.

Source: This article first appeared in the Muslim Link (www.muslimlink.ca)