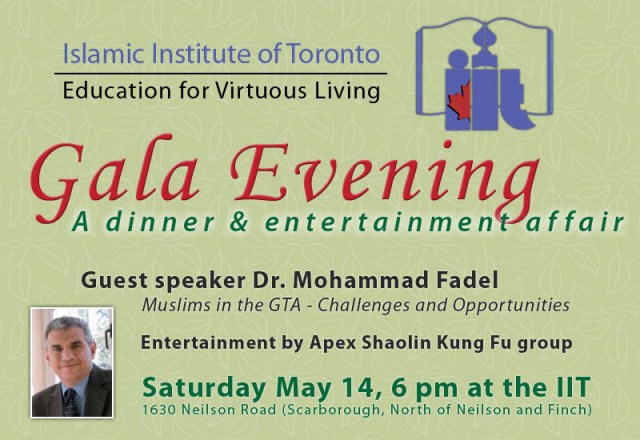 (May 15, 2011) – The challenge for the Muslim community is to develop a vision of what it means to be a Canadian Muslim and not be caught between the extreme visions which call for either assimilation or rejection of Canadian culture, according to Dr. Mohammad Fadel.

Dr Fadel was speaking at the Islamic Institute of Toronto’s dinner on Saturday evening where he delivered the keynote lecture on “Muslims in the GTA – Challenges and Opportunities.”

“I came here for academic opportunities that University of Toronto offered me,” said Fadel, reflecting on his own journey to Canada.

“The number of Muslims in the Greater Toronto Area would triple in the next 20 years if the current demographic trends continue,” said Dr. Mohamed Fadel.

Fadel told the audience that more mosques and schools will be needed given the demographic shift, requiring huge financial and human capital; in addition, the huge increase in population will also mean that all of the social problems of the community will require more social service institutions.

“The next phase will be more difficult than the foundational phase,” he said.

The leadership of the Muslim community will also need to be transferred to Canadian leadership with a stronger stake in institutions, he noted.

Dr Fadel told the attendees that the mosque is facing a challenge as Muslims have a consumerist attitude to the institution and, with a larger community, Muslim communal life no longer needs to be mosque centric.

“The mosque will need to evolve to give a sense of ownership,” said Dr. Fadel.

He added that Muslim institutions also need to incorporate Canadian democratic culture and the failure to include women in the organizational structure is deeply frustrating to Muslim women.

“No excuse for Canadian Muslim institutions to be a men’s club,” he said,

He concluded by noting that, while the community has much to be proud of, Muslims need to develop a commitment to come together or risk being an irrelevant minority.