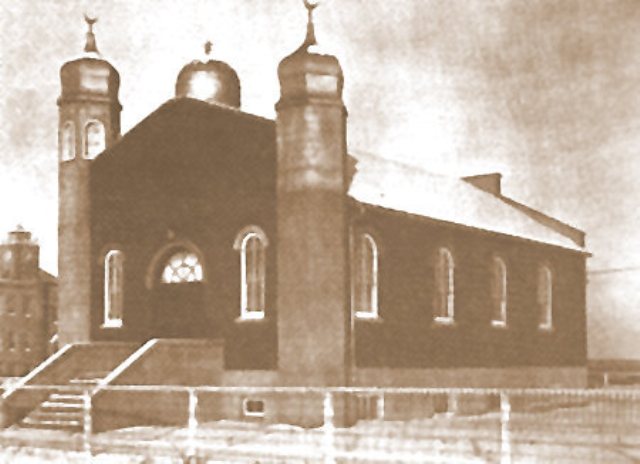 Visitors to the history park in Edmonton, Canada often pause in front of a small, red brick building wondering about its identity. Its long and narrow rectangular shape and onion-like domes suggest that it might be an Eastern Orthodox church. While the minarets rising from either side of the front entrance and crescent moons atop the domes betray its Middle Eastern roots. Inside, there are no pews, only 70-year-old carpets, faded and worn thin at spots. It is Al-Rashid, Canada’s oldest mosque.

Built in 1938, it was relocated to Fort Edmonton Park, set up to preserve and celebrate the history and heritage of the city of Edmonton, after controversy over its credentials for a berth among the historical landmarks. Its age was an issue because it was relatively young vis-à-vis the other buildings there, but its unique architectural design and significance in Canadian religious history won it a place of distinction.

Mosques with exteriors looking like churches are found in other Canadian cities as well. These were originally churches or parish halls that Muslims purchased and renovated. Toronto’s Jami Mosque, for example, used to be a Presbyterian church. Unlike these church buildings remodelled to look like mosques, however, Al-Rashid is the only structure originally built as a mosque that resembles a church.

The design of a place of worship is the public expression of the identity and vision of the people who built it. Most of the mosques in Canada are typical of Middle Eastern and South Asian architecture, reflecting the regions of origin of a vast majority of Muslim Canadians.

But the Al-Rashid is unique. It blends in with the local landscape like its builders who celebrated similarities with mainstream society while recognising differences.

The first Muslim settlers on the Canadian prairies came from Syria and Lebanon with the opening up of Alberta and Saskatchewan for development at the turn of the last century. Excited by the promise of the new land, they wasted little time putting down roots. They embarked upon a new beginning in the new country, preserving the fundamentals of their faith and adopting what was good in the local tradition, as their ancestors had over the centuries when they migrated to new lands.

A mosque synthesising elements of the local culture with the essentials of their faith was only their first step towards forging a Canadian Muslim identity. Patriarchal practices that excluded women from a fulfilling role in the mosque were also discarded. In a rare move, six of the 32 founders of the Al-Rashid were women.

Inside the mosque, male and female worshippers shared the same space. Everyone worshipped in the main hall, with women standing behind the men, separated only by the distance between them. Gender did not determine who could enter the house of God from the front door.

None of this would have been possible without a vibrant religious leadership because the pulpit was, and is, the revered source of authority.

For more than half of its active life as a place of worship, the Al-Rashid was guided by two dynamic imams who were more accepting of change than a newly imported imam would have been, because their background had prepared them to relate 7th century teachings of Islam to the contemporary world of their congregation. Imam Nejib Ailley (Aly) grew up in Canada after immigrating as a teenager. While the second imam – Dr. Abd al-Ati – was imported from Egypt, he was not new to Canada, having previously spent three years in Montreal as a graduate student at McGill University.

The fellowship kindled by a respectful etiquette, meaningful sermons and dynamic leaders moulded scattered individuals into a well-knit community whose descendents have produced a stream of devoted public servants and caring citizens. The list of the Al-Rashid mosque’s alumni reads like a ”who’s who” of Muslim Canadians.

Elsewhere in the country, mosques continue to be embroiled in the same old issues of identity, women’s place in the mosque and the disconnect between imported imams and their Canadian congregations. Al-Rashid gave us a model to meet these challenges seven decades ago.

* Daood Hamdani is the author of ‘The Al-Rashid: Canada’s First Mosque.’ This article was written for the Common Ground News Service (CGNews).