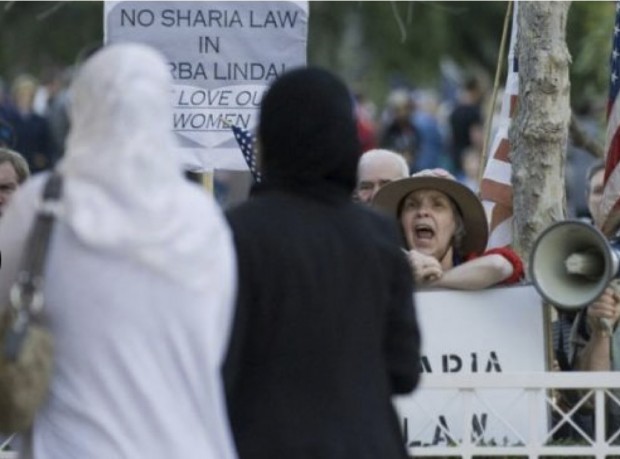 By Adel Syed and Lana Daoud

Last month, the Islamic Circle of North America (ICNA) Relief sponsored a fundraising dinner in Yorba Linda, California to raise money for women’s shelters and hunger relief across the United States. Families, including young children and elders, arrived to the event, and attempted to remain unscathed by epithets being shouted at them by angry protesters. The widely viewed video documenting the event speaks for itself.

Nonviolent protests, to be clear, are a civil right and valid expression, but the vitriol that attendants were subjected to during the ICNA event is symptomatic of a larger ailment. It’s not only indicative of a growing gap of understanding, but a legitimisation of fear and paranoia evident in the words of the protesters, and even in speeches by two US Congressman, Ed Royce and Gary Miller, and Villa Park Councilwoman Deborah Pauly.

The protest rally – sponsored by local Orange County conservative group ACT! For America, and Pamela Geller’s Stop Islamization of America, now designated a hate group by the Southern Poverty Law Center – initially took issue with a single speaker at the ICNA fundraiser. But it was their choice of hateful language and insults against Muslims that has since caused the uproar.

The shock of such hate is still palpable, and nearly a month since it took place, the protest has served as a wakeup call. People of all faiths and backgrounds across the country showered the Council on American Islamic Relations-Greater Los Angeles Area (CAIR-LA) with emails and phone calls of support, some even crying, showing their solidarity with Muslim Americans. The heartfelt messages were followed by eager questions: “What can I do? I want to do something, but don’t know where to start.”

The protests have served as a catalyst for dialogue, whereby those who have been working together across various faith communities at a grassroots level can now bring people together for the real discussion. Muslim Americans have been aware and even feared the escalation of threatening rhetoric since 9/11. However, only after the YouTube video of the protest at the ICNA event permeated the blogosphere did those who have been on the fence decide that enough is enough.

Americans are not a monolithic group defined by rhetoric, but a diverse nation that can work together. There are steps that can be taken to move toward inclusiveness and civility toward one another. Some steps that concerned citizens can take to involve local authorities and create positive change include contacting members of Congress to ensure they know their constituency is represented by diverse voices, or reaching out to local places of worship or organisations to encourage outreach among various faith communities.

This spring, CAIR-LA is organising a conference to provide necessary leadership skills to encourage civic engagement among Muslim Americans. In addition, The Los Angeles Sheriff’s department initiated an engagement process with Muslim American community leaders through the Muslim American Homeland Security Congress (MAHSC), a community partnership in which law enforcement, Muslim American leaders and youth throughout the Los Angeles area work together to keep communities engaged with each other. Such programmes can serve as a model in cities across America, in which people of diverse backgrounds work together toward a common goal to build a balanced society.

The American collective conscience has always been able to differentiate between a few who seek to marginalise and scapegoat a community and the majority that values pluralism. The outpouring of support from across religious and ethnic communities is a testament to the belief in equality for all.

The late US President John F. Kennedy once said, “Ultimately America’s answer to the intolerant man is diversity, the very diversity which our heritage of religious freedom has inspired.” Muslim Americans have been part of the American fabric since the 18th century, and continue to make contributions to its society. Muslim Americans are well represented in the armed forces, and serve as doctors, engineers, and school teachers in America’s classrooms. Ensuring that America continues to be a model of inclusiveness can only occur when Muslim Americans are seen as fellow neighbours to engage with, not outsiders to be shouted at, or altogether avoided.

* Adel Syed is the Government Relations Coordinator and Lana Daoud is the Development Coordinator for the Council on American Islamic Relations, Greater Los Angeles Area. This article was written for the Common Ground News Service (CGNews).

The United Nations Alliance of Civilization (UNAOC) has released the first edition of a #forSafeWorship Update, which has been collecting inspiring stories about places of worship around the world as shared symbols of our history, traditions, and humanity. UNAOC was established in 2005 and maintains a global network of partners