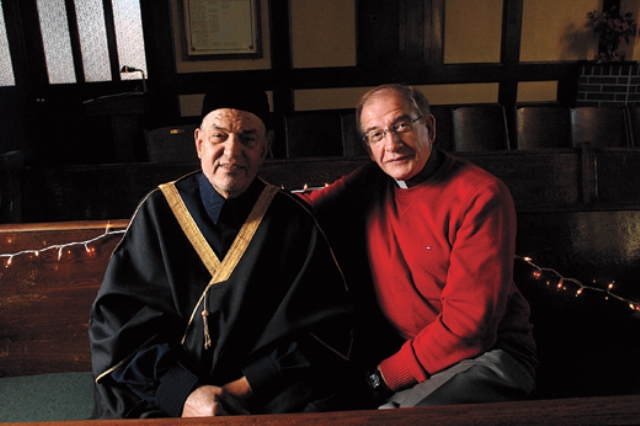 By Mardi Tindal, Moderator of The United Church of Canada

He wasn’t someone I ever expected to meet in a church, let alone on Christmas Eve.

But then again, I’d never before been part of a congregation so active in interfaith efforts.

Mohammed El-Farram, the Imam of the Brantford, Ont., mosque, arrived at the neighboring Sydenham Street United that evening with a Christmas gift for our congregation.

His very presence made me aware of how faithful Muslims and faithful Christians hold so much in common.

I was witnessing for the first time what a shared commitment to peace and justice could look like on the ground.

That Christmas Eve gave a taste of what happens when a United Church congregation and a mosque join efforts to honor the Prince of Peace, about whom we sang that evening.

The story of Christmas is one of the things we share.

It is told in both the Bible and the Qur’an.

In the Muslim holy book, Jesus’ birth is miraculous and his purpose is to come to serve people.

The relationship between the Brantford mosque and Sydenham Street United inspires me.

Mohammed and Rev. Barry Pridham support one another and give leadership together.

Neither is naïve about nor insulated from the tensions that arise in communities such as ours.

This small city in southwestern Ontario is home to people from many parts of the world with many points of view.

Recently these two leaders attended a poverty-awareness day in the city, where they spoke about doing more to assist the poor–but first, accompanied by members of both congregations, they took a turn serving soup.

In another joint effort, they will give a seminar at the local jail to help staff better understand the needs of the diverse prison community.

And for several years, the mosque has partnered with our congregation in a Sunday supper program at which we serve a nourishing meal to over 100 people weekly.

Co-operative efforts have been made to help those outside our city, too, including relief for Prairie farmers in Canada and flood victims in Pakistan.

The health of both the church and the mosque has improved through such efforts.

As Mohammed says, it’s deeply disturbing to hear of people killing one another because of difference of faith, when “thanks be to God, we talk together, visit, have understanding, appreciate our humanness, reach out and work together, cherishing our brothers and sisters.”

Only recently did I learn that Mohammed’s history with The United Church of Canada began when he was 13 years old, when treated by Dr. Bob McClure in a Gaza hospital.

He was reacquainted with McClure in 1969.

By then, McClure was moderator (elected spiritual leader) of the church and Mohammed was a nurse in Canada, having been trained at the same Gaza hospital.

Mohammed goes on to say, “I don’t go to the church to convert people to Islam either, so there’s no problem. We know our purpose is to help. We are serving. I find it very rewarding”.

I don’t now recall what it was that Mohammed brought to our congregation that Christmas Eve when I first met him.

His presence was the gift.