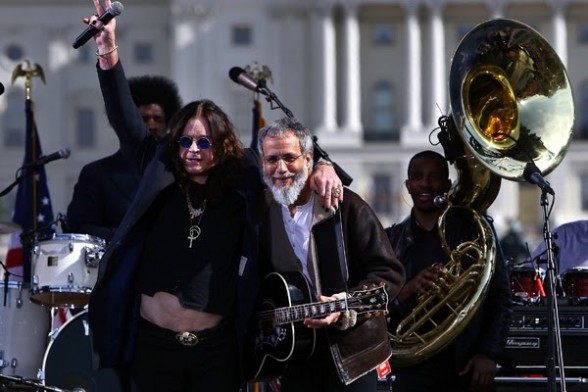 “Hug a Muslim Today” was the first hand-held sign I saw upon arriving at the Rally to Restore Sanity, which was recently held on a beautiful autumn afternoon on the National Mall in Washington, DC. That sign set the tone for what was to come.

I’m a child of the 1960s, which was perhaps why the vibes at the rally felt so familiar. Although the crowd was estimated at around 200,000 people and it was difficult to hear or see what was happening on the stage, people were polite, peaceful and positive.

For three hours we stood crowded together listening to music and other performances. The crowd cheered when renowned singer Cat Stevens, who now goes by the name Yusuf Islam, came on stage to sing his iconic classic song “Peace Train”. The crowd also listened to poetry, but mostly they came for the comedy – all of it poking fun at the hotly polarised political and cultural climate in American today.

A message emerged for “We the People”, not just for those of us at the rally, but for all Americans – and even for those beyond our borders: “We can have animus and not be enemies, and we need to know the difference between the two. If we amplify everything, we hear nothing,” said Jon Stewart.

Stewart, host of The Daily Show on Comedy Central cable television, was the organising force behind the rally. Towards the end of the rally, Stewart became serious and gave one of the most brilliant speeches I have heard in a long time.

Stewart laid some of the blame for the polarised atmosphere in the United States on the media. He chastised those media outlets that exaggerate our differences and inflame tensions between us. He acknowledged that extremist rhetoric in the media maybe good for ratings, but it is not good for our country.

Responding to the way that the media exaggerates differences between people, Stewart said, “The media can hold its magnifying glass up to our problems and illuminate problems heretofore unseen, or it can use its magnifying glass to light ants on fire.” He added that Americans don’t live “on cable TV; where we live is in our values and in the principles that form the foundation that sustains us.”

Commenting on the growing fear that Americans have toward Muslims he said that the inability to distinguish between terrorists and Muslims makes us less safe, not more.

Stewart took issue with the media telling us that America is ideologically divided because the reality is that most Americans don’t live their lives as Democrats or Republicans, or conservatives or liberals. We go about our daily routines doing the best we can, as people and not as ideologues.

In his book, Practical Intelligence, author Karl Albrecht makes the case that words are important: “Words can be weapons, they can be tools, and they can be art. They can inspire, incite, inflame, soothe, inform, educate, mislead, manipulate, and confuse. Many famous leaders have understood and capitalized on the psychology of language and have used this knowledge to arouse and mobilize people, for both good and evil. Poetry, literature, popular slogans, metaphors, and patriotic songs all have the power to move people in profound ways.”

How we use words was at the heart of the rally. No one advocated for ignoring or forgetting that we have very real differences between us. But the rally reminded us that we can be polite to each other, we can listen to each other and we can learn from each other.

What have we got to lose from trying?

Looking around I saw signs reflecting this spirit: “Be Excellent to Each Other”, “Nice is The New Cool”, “Civilization Requires Civility”, and one that perhaps we could all agree with, no matter what our politics, religion, or beliefs; a little girl held a sign that read simply, “More Chocolate Please”.

* Susan Koscis is the Director of Communications at Search for Common Ground. This article first appeared in The Sacramento Bee and was written for the Common Ground News Service (CGNews).