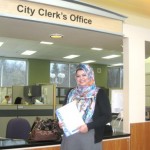 “I decided to run for a number of reasons. However, the most compelling reason was bringing change to a City Council that needs a fresh perspective and new ideas to help manage the challenges the city faces,” she said.

Heer is well-known community worker in the Muslim and South Asian communities and a proud Bramptonian.

She has been active in Peel Region serving on many boards, including the Care Factor, Shalom-Salaam and Concerned Citizens of Brampton.

She has been part of many causes such as raising funds for Haiti earthquake relief, for William Osler Health Centre and for food banks across the city.

The Province of Ontario has designated Brampton as an urban growth area and by 2031, the City’s population is expected to grow to 725,000.

Brampton is the youngest community in the Toronto census metropolitan area (CMA) with a median age at 33.7 according to the 2006 Census.

Heer sees her role, if elected to the City Council, as bringing people together to tackle the city’s growing needs.

“I would like to see Brampton’s growing community have all the necessary services to accommodate the needs of my family and all families. Together, we can do this. Brampton is a community with people of many talents. Let’s use our collective talents and make Brampton the leading city it has the potential to be.”