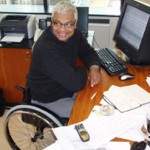 (March 4, 2010) – Shuaib Chalklen, Special Rapporteur on Disability for United Nations will be the keynote speaker at CAM-D’s (Canadian Association of Muslims with Disabilities) Annual Gala Dinner on March 28, 2010 in Mississauga, Ontario.

Chalken is a prominent leader who has made extensive contributions to the advancement of persons with disabilities.

The Gala Dinner is a fund raiser to support the work of the organization which engages in public education programs about accessibility and the rights of people with disabilities.

CAM-D is also looking to extend its network for families and individuals with intellectual disabilities and to provide training for religious teachers and people who are blind to read the Quran in Braille. It is also hoping to provide sign language interpretation at events for deaf Muslims.

Other speakers slated for the gala event include Peter Fonseca, Minister of Labour for Ontario, Hazel McCallion, Mayor of the City of Mississauga and Sheikh Abdalla Idris Ali, Deputy Secretary General of ISNA Canada.

There will also be video messages during the program from Sheikha Hessa Al Thani of Qatar and Imam Zaid Shakir.

Mr. Chalklen held numerous positions in the fields of disability, governance and administration at the national, regional and global levels, including: Senior Policy Analyst in the Presidency of South Africa (2006-2007); Chief Executive Officer of the Secretariat for the African Decade of Disabled Persons (2003-2006); and Director of the Office on the Status of Disabled Persons in the Presidency of South Africa (1996-2001).

The mandate of the Special Rapporteur is to monitor the implementation of the Standard Rules on the Equalization of Opportunities for Persons with Disabilities, adopted by the General Assembly in 1993, and to advance the status of persons with disabilities throughout the world.

This gala dinner is sponsored by the Olive Tree Foundation, ISNA Canada and Human Concern International.

For information on the Gala and to purchase tickets please visit www.camd.ca