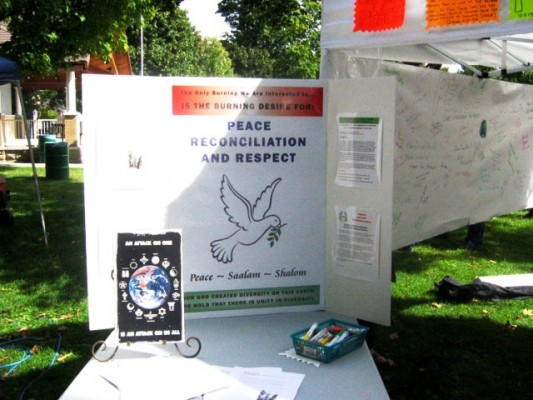 (Aurora, ON) – A last minute decision was made on Thursday, September 9 by Aurora’s Trinity Anglican Clergy – The Reverend Canon Dawn Davis, and the Reverends Stephen Kern and Dawn Leger would create a living answer to the threats of burning copies of the Qur’ans made by church members in Florida.

In co-operation with the Trinity Church’s resident Interfaith Minister, Rev. Terry Weller, a theme was decided upon – “The only burning we are interested in is a burning desire for “PEACE, RECONCILIATION AND RESPECT”.

A secondary theme presented was: “OUR GOD CREATED DIVERSITY ON THIS EARTH. WE HOLD THAT THERE IS UNITY IN DIVERSITY”.

Trinity Anglican Clergy also decided to create an open air booth at the farmer’s market to be held at the town park the following Saturday, September 11.

The church handed out four pages of Statements made by The Lutheran Churches of Canada, The Toronto Interfaith Council and the Newmarket and area Interfaith Council, as well as, a statement from the Rector of Trinity Anglican Aurora. 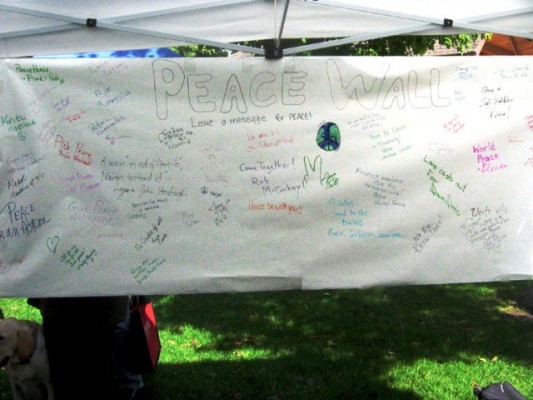 The effort was joined by four area Muslims, Khaled Seaydoun, Mae Khamissa, David Coskun and Daniel Coskun. They came with a generous supply of information packages, each containing a copy of the Qur’an, and booklet briefly outlining the tenents of Islam, as well as, answers to common questions, and a 75 minute video about Islam.

Over 100 people stopped at the booth, many of them engaging in conversation.

Two “Peace Walls” were built of wide newsprint paper and visitors were asked to write a note to peace. Both walls were full by the end of the day

This marks the first time that an open air community booth was hosted in Aurora on the topic of Interfaith and peaceful reconciliation between religions.

For a portion of the Rev’d Canon Dawn Davis’s sermon from 12th September addressing this issue:- Listen now