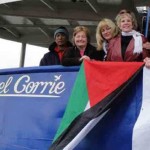 I never cease to be amazed at the power of the human spirit to survive. During my last visit to Gaza in October 2008 I was amazed and deeply moved by the power of the people I witnessed. In a triumph of hope over adversity and tremendous suffering, love still abides.

Gaza comprises a small strip of land 27 miles long and 6 miles wide. This coastal strip is bordered by Israel on the one side, the Mediterranean Sea on the other and to a lesser extent by Egypt at the southern end. With one and a half million inhabitants Gaza is the fifth most densely populated place on the planet, 50% of which are under the age of 18. Two thirds of the total population hold refugee status and is comprised of victims of previous acts of Israeli aggression and their descendants.

Gaza’s people have suffered an Israeli occupation for over 40 years and even though Israel withdrew from Gaza in August 2005, it has continued to control every aspect of life in the tiny coastal strip. Hamas was democratically elected to power in the 2006 Palestinian elections and has governed the Gaza strip since the summer of 2007. It was at this time in 2007 that Israel commenced its devastating blockade of the strip.

Essentially the blockade represents a draconian policy by Israel. A minimum amount of basic subsistence goods are allowed to enter the strip with the intention of holding a malnourished population just short of outright starvation. Coupled to the severe food shortages are the restrictions/ban on basic essentials such a medicine and desperately needed reconstruction materials. This blockade constitutes “Collective Punishment” of a civilian population and an illegal act under Article 33 of the fourth Geneva Convention. But the culture of impunity under which Israel operates means that Israel continues to ignore international law with many of the world’s governments and international bodies’ remaining silent.

In the words of one Israeli professor, Israel has made Gaza into the largest open air prison in the world. Whether by land, sea or air the one and a half million inhabitants of Gaza are trapped, their six border crossings are closed (including the Raffah crossing to Egypt), their airport destroyed and their port and coastal waters shut down by a naval blockade.

The people are forced to live a suffocating life of misery and hardship. The closure has impacted every imaginable aspect of their existence both physical and emotional. Lives are constantly lost for lack of access to hospital treatments unavailable in Gaza. Bright and willing students are deprived of an opportunity to progress their studies; places offered abroad in universities can not be accepted as students are unable to leave.

The Israeli policy of divide, blockade and conquer used against the Palestinian people strikes right to the heart of family life. Families in Gaza can no longer visit their relatives in the West Bank. Wives are torn from husbands and husbands from wives. Many are forced to live apart some in the West Bank others in Gaza. All across the Occupied Palestinian Territories there is a common, shared experience of humiliation. The West Bank is constantly shrinking under a deluge of illegal Israeli settlements and new settlement construction. The countless thousands of Gazans left homeless after the Israeli bombings can find a paler shadow of the same existence among their friends and family members in East Jerusalem, where forced evictions and house demolitions are a daily occurrence.

The children of Gaza are the ones who suffer most. During my visit to Gaza in October, 2008 I went to visit the area of Khankhounis. In all my years of visiting areas of poverty and devastation, I have never witnessed anything so terrible. The area had been hit by floods that had washed away the roads, forming a river that flooded the houses of many hundreds of people with mud. We walked through home after home completely destroyed and yet some families made vain attempts to salvage what they could and live in the midst of this horrific destruction.

The children played on the destroyed roads and footpaths, amidst raw sewerage and the mothers did their best to protect their young ones all too aware of the dangers of disease lurking in the open puddles which, children being children persisted in playing in. Community leaders explained that they were unable to reconstruct homes, roads and repair open sewers as Israel would not permit the materials and equipment to enter Gaza.

Teachers had no writing materials, the doctors not enough medicines and the children were suffering from malnutrition and showing signs of stunted growth. One father asked ‘if I give you some money, next time the Free Gaza boat comes in will you bring in some milk, the children have no milk’. (In June, 2009, twenty-one of us tried to sail on the Free Gaza boat to Gaza, but our boat was hi-jacked in International waters by Israeli navy and we were all forcibly taken to Israel, put in prison for a week and then deported).

Since 2008 all of this suffering has only magnified and worsened due to the shattering effect of Operation “Cast Lead”, Israel’s brutal attack on Gaza that took place in December/January 2008/2009. Disease from raw sewerage and shortage of medicines are not the worst things to affect the children these days. During the Israeli assault on Gaza, bombs and white phosphorus were dropped on Palestinian civilians. Of the l,400 people who died, over 400 were children. The agricultural land is now radiated with depleted uranium and holds it own terrible dangers for the people of Gaza. Many who depended on the land for their livelihood have seen their stock and crops destroyed and the soil poisoned.

Where is the hope? Where is the love in the midst of such suffering and injustice? The international community has all but failed in its duty of care and seems unwilling or unable to take a stand against Israeli brutality, but thankfully there are those who still refuse to stands aide.

So in an expression of love and solidarity the “Freedom Flotilla” takes to the water in an attempt to breach the siege on Gaza. The Freedom Flotilla comprises 8 boats, in a joint effort including Turkey and Greece, over 600 People from over 60 countries, will sail to Gaza in May, 2010. The flotilla will be joined by a cargo boat from Ireland, the MV Rachel Corrie. Its large cargo includes tonnes of construction material, cement, medical equipment and a special donation of printing paper from Norway. This trip will again highlight Israel’s criminal blockade and illegal occupation. In a demonstration of the power of global citizen action we hope to awaken the conscience of all.

We hope the Freedom Flotilla will provide a way to open up the sea. When we arrived in Gaza on the Free Gaza boat in October 2008 last we stayed at Marna House, the hotel owner was overjoyed as he invited us to sign the register. He explained his joy telling us that, with closure of their Port to the outside world, we were the first people to enter Gaza by port and stay in his hotel in over 40 years of Israeli occupation. It would be wonderful if the sea passage could be permanently opened for the people of Gaza so they can freely enter and leave their own land, and be reunited again as a part of the Mediterranean family, selling their produce and buying what they need without let or hindrance.

This journey, by boat, will be my third with The Free Gaza Movement and it has shown me that people can make a difference. The Free Gaza Movement was started by a few people with an idea and the courage to make it happen. If people wish to support their work and follow us on the boat journey to Gaza visit their website at http://www.freegaza.org/

But above all we are inspired by the people of Gaza, whose courage, love and joy in welcoming us, even in the midst of such suffering, gives us all hope. They represent the very best of humanity and we are all privileged to be given the opportunity to support them in their nonviolent struggle for human dignity and freedom.

Source: Transcend Network. The TRANSCEND Network is honoured and proud of having Mairead Maguire among its members. (TMS Editor).