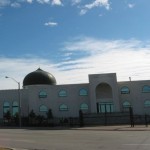 (May 27, 2010) – This weekend, the City of Toronto presents the annual Doors Open Toronto — one weekend, once a year — when 150 buildings of architectural, historic, cultural and social significance open their doors to the public for a city-wide celebration.

The program allows visitors free access to properties that are either not usually open to the public, or would normally charge an entrance fee. Many locations have organized guided tours, displays and activities to enrich the visitor experience.

One of the featured buildings is the Islamic Foundation of Toronto, one of the oldest Muslim organizations in Canada.

It was established in 1969, when an old 3000 square foot building was purchased at Rhodes Avenue and converted into a mosque.

The 2.3 acres land, where the Islamic Center currently stands, was purchased in 1984. It was a giant leap towards the vision of an institution beyond a neighborhood mosque – a center that would provide quality programs in areas of religion, education and social services for the residents of Greater Toronto area and bring them closer.

IFT, for the 6th consecutive year is chosen by the City of Toronto to be showcased to the general public. Over the course of 2 days, approximately 1,500 citizens of Toronto, curious about Islam visit Foundation.

The first Doors Open Day (La Journée Portes Ouvertes) took place in France in 1984. The idea soon spread to neighbouring countries, including the Netherlands, Sweden, the Republic of Ireland, Belgium and Scotland. In 1991, these events were united as European Heritage Days at the initiative of the Council of Europe. In 2003, all 48 signatory states of the European Cultural Convention participated in European Heritage Days.

In 2000, the City of Toronto launched the first Doors Open event in North America. In 2002, the Ontario Heritage Trust launched Doors Open Ontario, the first province-wide event of its kind in Canada. The Doors Open concept continues to spread across North America with events now being held in Newfoundland, Alberta, Massachusetts, Western New York State, New York City and Denver.