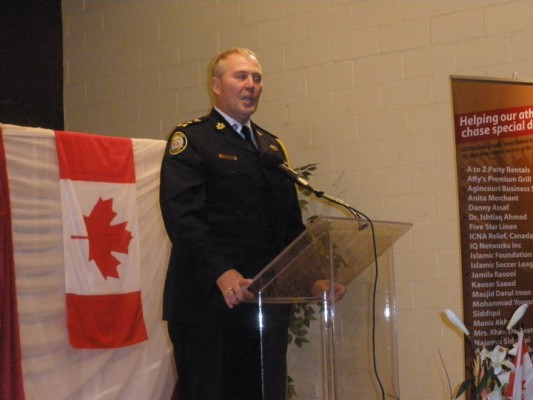 (May 12, 2010) – Toronto’s Muslim community has stepped forward to send Special Olympic athletes from Toronto to the 2010 Summer National Games

Muslim organizations, businesses and professionals of the Greater Toronto Area raised $16,000 to sponsor Team Ontario for the 2010 Games.

On Sunday May 9, the Islamic Foundation of Toronto hosted a special cheque presentation ceremony and luncheon in honour of the Special Olympics Athletes of Team Ontario.

“We wish to thank the sponsors and organizers of the event as well as those who attended on a Mothers’ Day afternoon,” according to Special Olympics Ontario.

“Many thanks to the Islamic Foundation of Toronto and its members for hosting our celebration and particular thanks to Waris Malik, the Fundraising Co-ordinator of the Toronto Community Council who made all of this possible.” 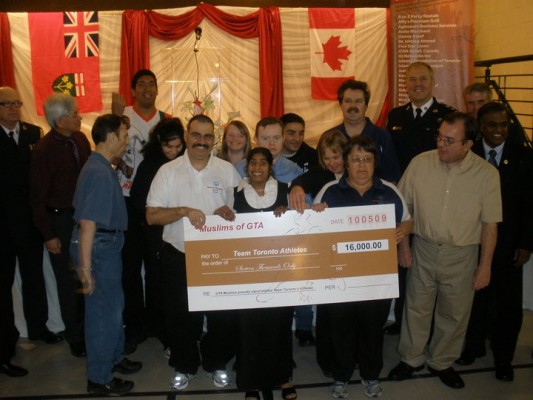 The Games are a qualifying event for the 2011 World Special Olympics Summer Games to be held in Greece.

The event was attended by a number of dignitaries including Toronto’s Chief of Police, William Blair, Deputy Chief of Police, Tony Warr, Federal Member of Parliament, Derek Lee, Provincial Member of Parliament, Bas Balkissoon, Toronto City Councillors, Raymond Cho and Chin Lee, members of the Ontario and Toronto Council for the Special Olympics, as well as, community and youth leaders.

Also in attendance at the luncheon were 16 qualifying athletes, accompanied by their parents and coaches.

The event was highlighted by a keynote speech from athlete Vincenzia Stalk.

“I am proud to represent Toronto at the Games and I thank all the sponsors for making it possible for me and my team to go to National Games,” said Ms. Stalk.

Chief Blair, Deputy Chief Warr, along with several other dignitaries expressed heartfelt appreciation for the Muslim community’s support for the Special Olympics.

A plaque was presented by Councillor Cho to commemorate the event.

The Special Olympics is a worldwide movement to empower athletes with disabilities.

“All we ask from the athletes is for them to try their best when they participate in the Special Games. Sincere efforts for the righteous cause never go to waste,” said Sheikh Hasan, Imam of the Pickering Islamic Centre.