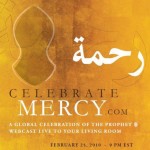 (February 24. 2010) – On Thursday, February 25, the website celebratemercy.com will host a global webcast celebration of the Prophet Muhammad; this first event of its kind has attracted unprecedented attention in the online community.

Throughout the Islamic lunar month of Rabia al-Awwal, millions of Muslims worldwide commemorate the Prophet Muhammad, by remembering his life and character. This year, for the first time, an online celebration is being organized to facilitate people everywhere—both those who are Muslim and those who are not—to celebrate his life with prominent world figures, scholars, and performers.

Titled “Celebrate Mercy” and hosted by the website celebratemercy.com, the event will feature well-known Muslim speakers and entertainers in both pre-recorded video/audio presentations and live webcam presentations. The program will include short talks, songs, and poetry, all on the subject of Muhammad, the Prophet of Islam. The program is expected to last three hours, beginning at 9:00 p.m. EST on February 25, with a global re-broadcast on Sunday February 28, at 10:00 a.m. GMT.

Presenters at the event will include Yusuf Islam, the former Cat Stevens; Dalia Mogahed, a member of the Advisory Council to President Obama; the President of the Muhammad Ali Center; and several other notable Muslim scholars and artists.

Marketing for the event began earlier this month through social networking sites, such as Facebook and Twitter, and word of the event quickly spread across the online world.

Within one week of the launch of celebratemercy.com, 3400 individuals became “fans” of the event on Facebook, representing over 60 countries, and over 400 people signed up to volunteer.

In explaining his inspiration for the event, Tarek El-Messidi, founder of celebratemercy.com, stated: “Muslims consider the Prophet Muhammad to be the best of God’s creation. It makes me sick to my stomach to think that many in the West associate the name Muhammad with the heinous crimes of Muslim extremists. When people hear the name Muhammad, mercy should be their first thought; this event will explain why.”

The Prophet Muhammad was born in Mecca (in modern day Saudi Arabia) in 570 AD. Muslims believe that he was the last in a series of prophets chosen by God, and the teachings revealed to the Prophet Muhammad form the basis of the religion of Islam. Over one billion people worldwide commit to his teachings, and he is thought by many—Muslim and non-Muslim alike—to be one of the most influential people in history.

Amjad Tarsin, one of the event coordinators, explained the significance of celebrating the Prophet’s life in today’s world: “[Prophet Muhammad] taught us that forbearance is greater than revenge; forgiveness more lofty than punishment; and compassion more effective than austerity. Above all, he taught us mercy. And in these difficult times, we are all in need of more mercy in the world.”