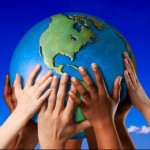 Everybody needs a tribe. One person alone faces a frighteningly big, sometimes brutal world. Even a family can be too small to deal with some challenges that come down the pike – while if family relationships are the only ones around, obsessive family closeness can suffocate us. No, tribes are the way to go, which is why most of the human race carefully conserves them.

When religions behave like tribes, though, things can go wrong. Religion loses itself. For the very point of an Abrahamic religion is that some things are more important than the interests of my group.

Nearly all of us learn rules and ideals that honour the members of our own tribe. But there’s a problem. When tribe comes up against tribe in the struggle for resources, those rules do not apply. And where there are no rules, bad things can happen – massacres, cruelties – seemingly without repercussions. It’s only our own tribes that can require moral responsibility of us in ways that we can see.

That’s why the notion of one God ruling everyone – a universal God of Justice – was a revolutionary idea. Historically, this vision revealed itself in times of tribal strife. And one of the central points its revelation makes is that there can be no injustice without repercussions. The world of responsibility extends far beyond what we can see. Either the consequences of our acts hit us now, or else they hit us later, but there is no escaping the impact of what we do. For the whole world is in the sight of God, both physically and morally.

What monotheism teaches us is that everyone is connected to everyone else at any given moment time. This can apply to the Israeli-Arab conflict as much as anywhere else. Therefore our true self-interest does not lie in grabbing the most we can or in refusing to share. And my true accountability lies far beyond the mere approval of my tribe.

Reminding us of the call to universal justice is what the institution of prophethood was all about. And it is the prophetic voice that today calls Jews and Muslims alike to the remembrance of the God of All. Remembering this is essential when dealing with the Arab-Israeli conflict.

Judaism and Islam were both born out of struggles for freedom and dignity, particular struggles that based their aspirations on a universal vision of human worth. The tragedy of monotheism has been that with the passing of generations, the self-centeredness of individual communities has tended to overwhelm the universal principles that called them into existence in the first place. Traditions lose their context; the forest gets lost in the trees. And then another sort of bad thing happens. For since my trees are slightly different from your trees, and I prefer the familiar, that means that I must be better than you. This simple slip of the mind introduces untold evil into human relations.

The way the logic goes is that if my community is the only one to really understand God, and only the community that really understands God matters, then God belongs to us…and our interests are far more important. The universal justice my religion teaches then becomes an empty concept, a sort of sacred image I drag out and show around occasionally to increase my self-esteem. For when its founding vision is lost, monotheism is no more than idolatry with fewer options.

Our prophets all warned us about that. Here’s Isaiah speaking for God: “When you come to appear before me, who has asked this of you, this trampling of my courts? Stop bringing meaningless offerings!” Today, the institution of prophethood has vanished, but the prophets still have plenty of heirs. There are so many who struggle for the human dignity of their seeming opponents – even in the Israeli-Arab context. Unfortunately, these heirs like the prophets before them (as Jesus remarked), tend to have no honour back home. Most of us find it much easier to blame others than to examine ourselves, so whoever calls us to self-examination is likely to be wildly unpopular. Let us take a moment, therefore, to honour both Jews and Muslims, Israelis and Palestinians – and people of all communities – who take a stand for justice over tribe. For with such often very humble people rests the guidance of God, the truth of religion, and the future of the world. May we all find the courage to seek a place among them.

* Rabia Terri Harris is founder and director of the Muslim Peace Fellowship (www.MPFweb.org), dedicated to the theory and practice of Islamic nonviolence and is a Muslim community chaplain. This article was written for the Common Ground News Service (CGNews).