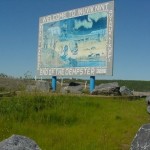 (April 15, 2010) – Muslims living in Inuvik, in Canada’s Northwest Territories will soon be getting a mosque, thanks to the fund-raising efforts of a Winnipeg-based Muslim foundation, the Zubaidah Tallab Foundation.

According to CBC news, the Foundation is raising money to build a mosque in Winnipeg then ship it 4,000 kilometres by truck and barge to the northern community.

The Muslim community in Inuvik which has only about 100 members has tried raising money for a mosque, but it’s just too small to do it on its own.

When completed it will be the northernmost mosque in the world.

A place of rich diversity, Inuvik is located on the Mackenzie Delta – Canada’s largest fresh water delta, close to the Arctic Ocean, with a spectacular view of the Richardson Mountains. Inuvik is nested between the treeless tundra and the northern boreal forest, and overlooks the incredible maze of lakes and streams of the Delta

The Zubaidah Tallab Foundation is a registered Canadian Charity and Private Foundation.

According to the charity’s website, it was established to “advance religion by establishing and supporting a house of worship with services conducted in accordance with the tenets and doctrines of the religion of Islam.”

Zubaidah Hashim Tallab was the late mother of Dr. Susan Ghazali, who wanted to start a Muslim charity in her name (Sadaqa Garia) after she died in the Mayo Clinic in January 18th of 2006.

The Zubaidah Tallab Foundation needs to raise almost $300,000 by September to get the mosque on the final barge of the year to Inuvik.