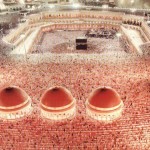 Muslims – wherever they are geographically located — live in continuous connection with the sacred house called the Ka’bah, the symbol of their relationship with the Creator, the homeland of the Prophet, and the first Masjid (Mosque) on earth. Allah has chosen this Masjid as the place where His servants will make ‘Ibadah (worship) to Him and glorify His Name.

Thus a visit to this sacred house, in the revered ancient city of Makkah, in this most sacred land, is the wish of every Muslim.

This central pilgrimage of Islam, whose origin dates back to the Prophet Ibrahim (Abraham), brings together Muslims of all races, nationalities and tongues to share in one of life’s most memorable spiritual experiences. In fact, for fourteen centuries, countless millions of Muslims from the four corners of the earth have performed the Hajj to Makkah, the birthplace of Islam.

In reality, Hajj is the greatest annual congress of believers anywhere on earth. Not only is it important to more than two billion Muslims around the globe, but to the whole of humankind. Hajj marks part of the Ummah’s (Islamic world community’s) preparation for the Qurbani, or sacrifice, which reminds us of the sacrifice that the patriarch Ibrahim was commanded to make of his son Isma’il, ‘alayhimassalam. It reminds us of the mercy Allah extends to those who surrender themselves in complete trust to His Will just as Ibrahim and Isma’il did. As the Qur’an records the words of young Isma’il: “O my father! Do what you are commanded. If Allah wills, you shall find me … steadfast.” (Qur’an, As Safat 102).

This Hajj is a vibrant proof of Unity among all Muslims around the one inalterable principle of Islam – Tawhid, the Oneness of Almighty Allah.

Hajj gathers millions of believers and calls upon all of them to unify their opinions, ideas and values, helping them collectively to support one another in upholding all that is good and decent. Islam stands for unity of the human race, teaching that all peoples in their global diversity were originally as one, deriving their existence from the sole Creator of All, and that the barriers now separating us — race, color, class, region, ideology, etc. — are really no more than constructed illusions.

In fact, the divisive ideologies based on negative human distinctions are among the most dangerous viruses on earth. Hajj, on the other hand, proves that the hope of unity can be a reality, for Islam removes all differences and evaluates or rates people by their conduct. Islam seeks to build an intellectual, moral, ethical and just ideology throughout international society – an ideology strong enough to stand its ground against existing tribal, racial, linguistic and national barriers which have turned the world into a sea of tragic conflict.

Hajj symbolizes an opposite movement, from chaos and conflict toward unity in Almighty Allah. It is a noble tradition that upholds the hope and potential of kindred love and solidarity among the people. In calling all believers back to the basic principles of Tawhid (which are expressed in the words of Talbiyyah during Hajj) it is the living response of Allah’s servants; on this special occasion, all pilgrims are guests answering their Lord’s personal invitation to visit His house in Makkah.

In English paraphrase, they mean: “Here I am at Your service, O my Lord. My humble submission is only to You, and I am here submitting to You who does not have a partner, for no one is worthy of worship except You. You are the Only One Who deserves every praise. You are the Only One Who has all power, so help me, O Allah, that I benefit from all the blessings that You have bestowed on humankind. This is the only way, for I have no other reason for existence.”

This repeated statement is meant to re-awaken every Muslim’s consciousness that Allah is the eternal Centre of their reality and the source of all meaning and blessing in life. With these words, believers fervently express their belief and their commitment to the Straight Path that Allah has set out for them. The journey to Hajj is purely for the sake of Almighty Allah who wants us to learn from the examples of the Prophets that He chose to be our teachers. Allah wants us to learn that Hajj is a spiritual training ground and a unique experience of worship which changes a person from the inside out, washing him/her clean and restoring his/her belief and attitude.

The discipline of Hajj has often been the key to awaken many Muslims to a fuller and deeper understanding of the concepts of Islam and its true Message. More than simply an annual institution or ritual, Hajj holds the potential to draw all believers, Insha’allah, into a future filled with blessings, among which the following are central:

1. Purification of the soul from all traces of sin. – Hajj provides the greatest opportunity for believers to seek forgiveness of sins accumulated throughout life and to make Du’as for others. This can happen when one has performed Hajj Mabrur, or done the pilgrimage in a proper way, as the Messenger of Allah mentions: “They will return from Hajj as newly born babies (free of all sins).” (Hadith).

2. Unity and understanding. – Through Hajj, the believers come to know each other and are made more aware of the mutual affairs of their brothers and sisters from all over the world. In Hajj they feel more connection and kindred love for each other, irrespective of their geographical or cultural backgrounds. Thus, Hajj unites the believers of the world into one international community.

3. Confirmation of commitment to Almighty Allah. – Through demonstrating that they are ready to sacrifice all material possessions and values for the sake of their Creator, believers show their commitment to Allah; for unless a Muslim really loves Allah, he/she would never undertake such a long, costly and arduous journey to Makkah, leaving all their near and dear ones behind.

4. Reminding believers of complete trust in Allah. – Believers com efface to face with the deep faith and unshaken commitment of Ibrahim and his son Isma’il (peace be upon them) when they were called to make the ultimate sacrifice – of life itself — in His name.

5. Preserving important rites. – Hajj reminds us of the rites which were ordained for us by Allah and taught by His Last Messenger, the Prophet Muhammad (S).

6. Walking in the Prophet’s footsteps. – Hajj is a memorable and cleansing means of acquainting believers with the spiritual, historical and physical environment in which the last Messenger, Muhammad (S), lived and served Allah.

7. Spiritual blessing. – This is the greatest Hajj blessing of all, for pilgrims (Hujjaj) are encouraged to develop a greater consciousness of Allah in and to return home with a sense of uplifted spirit and fulfillment.

Therefore, during these important days of Hajj and Eid, let us remember the following:

1. There are many Muslims in North America and your own local area who need your help.

2. Your neighbors, whether Muslim or non-Muslim, need your support in different ways.

3. Millions of Muslims around the world need your ongoing help and support.

4. Your relatives and family value your support; never forget them or take them for granted.

5. During Eid, try to visit one another other on these blessed days.

6. Make a point of visiting those who are sick, hospitalized, in long-term care facilities, or shut-in.

7. Organize Eid dinners among yourselves and take time to enjoy the occasion!

8. Share all the beauties and blessings of Eid with your children: give them gifts, take them on outings and visits; and participate with them in wholesome entertainment so they can feel proud of having such a great celebration of their own. At this time of year, many Muslim children feel left out when they see all the attention paid to the secular and religious aspects of Christmas; with Eid to celebrate, they have every reason to enjoy the season.

9. Life keeps moving on, and with it, our good intentions! Remember that you and I will be one year older next Hajj season … Now is the time to get serious about improving our lives.

10. Your mission in this great country of Canada is to educate yourselves, help yourselves in order to help all others around you. It all starts with family members and relatives, extending out to our neighbors, our communities, and the world large.

11. Lastly, remember always to be a good representative of Islam and a good citizen of this wonderful country – your homeland and mine – CANADA.

(Dr. Zijad Delic is the National Executive Director of the Canadian Islamic Congress).