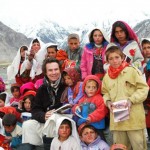 (April 4, 2010) – Greg Mortenson’s book Three Cups of Tea is the story of a failed American mountain climber’s humanitarian project to build schools in the most underprivileged parts of Pakistan’s northern areas.

The book now has a sequel, Stones into Schools, which narrates Mortenson’s ongoing efforts to build schools in the region.

So successful has Mortenson’s narrative proved that free copies of the book are being distributed among lawmakers on Capitol Hill in an effort to direct them toward the “right” focus on Pakistan. Presumably, those behind this effort hope that reading Mortenson’s tale – his friendly collaboration with the villagers in Korphe in northeast Pakistan, his marked lack of condescension while confronting obstacles in the path of the construction of schools and his perseverance in bringing education to remote areas – would provide US congressmen with some much-needed perspective on the troubled region.

Such intentions are unquestionably meritorious. No Pakistani could object to the refreshing nature of Mortenson’s story and the courage with which he refuses to be daunted by cultural, religious and linguistic differences compounded by an array of naysayers. Indeed, Pakistanis are grateful for Mortensen’s ability to sidestep the perpetual narrative of the Taliban, terror and the exploding radical-Muslim time bomb that routinely defines discussions about Pakistan, particularly on Capitol Hill.

To consider Mortenson’s story of initiative and resolve as solely a project to redeem Pakistan in the eyes of the West would be an error. Several narratives penned with equal inventiveness and with the deliberate aim of delivering Pakistan from the burden of its reputation have been denied such publicity. Similarly, enterprising non-governmental organisations that have built schools in rural Sindh and Punjab – two of Pakistan’s provinces – have failed to catch the international imagination with the level of intensity garnered by Mortenson’s project.

The villagers of Korphe are able to see Mortenson as a person and vice versa; bonds are built and relationships created that evade political differences and historical contexts. The author’s humility is a foil against the hubris of the US President George W. Bush era, his ability to overcome barriers with kindness and yet a firmness of purpose a drastic departure from the bombs and drones that define American officialdom.

The cowboy of the Wild West, the risk-taking entrepreneur, the buccaneering explorer are all wrapped into one peaceful package in the person of Mortenson, who manages to construct alone what the governments of both the United States and Pakistan wrote off as impossible.

This recent introduction to Pakistan’s baffling complexities of history, enmities between Islamic political groups, ethnic differences and civilian-military relations can prove daunting, not to mention time-consuming, particularly to American lawmakers looking to coin nifty sound bites on the “AfPak” question.

While education is one of Pakistan’s needs and Mortenson’s efforts are laudable, they do not present a thorough investigation into Pakistan’s structural problems and should not be taken as a stand-in for a deeper understanding of the country. In addition, there are Pakistanis such as philanthropist Abdul Sattar Edhi who do not have Mortenson’s international fame but who have, with even fewer resources, managed to deliver their communities from poverty and build schools or small industries without the intervention of a foreign saviour.

Undoubtedly, Mortenson is under no obligation to include mention of such people in his own narrative. However, it must be recognised that the uncritical acceptance of his story as the story on saving Pakistan suggests that no local heroes have taken the initiative of improving their own nation. For a post-colonial nation, such omissions of agency can be damning in a historical context where the celebrated hero is rarely one of their own.

The point of this article is not to belittle or criticise the incredible courage and sincerity of a man who chose to fulfil a promise made to a forsaken village that had little hope. Instead, the aim is to encourage those Westerners that have consumed three cups of tea in their encounter with Pakistan to perhaps partake of a few more. For Pakistanis, particularly Pakistani Americans, the message is to know that while we may be overjoyed with just a little understanding, we can hope for more, and that we must venerate our own little-known heroes just as much as we venerate Greg Mortenson.

* Rafia Zakaria (rafia.zakaria@gmail.com) is a US-based attorney and teaches constitutional law and political philosophy. This abridged article is distributed by the Common Ground News Service (CGNews) with permission from Dawn.com.