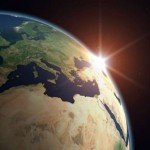 Last Thursday, on the 40th anniversary of Earth Day, I found myself thinking back to my first hiking trip to New York’s Bear Mountain. I was six years old. Having grown up in Brooklyn, New York, I thought the entire world was a sea of concrete buildings. But that trip changed my reality. I remember moss growing on rocks, small streams of water and fresh air.

When it came time to pray, my father, a convert to Islam, shared with me a saying of the Prophet Muhammad: “The earth is a mosque.”

Ever since that hiking trip, I have contemplated the sacred nature of the earth. The entire planet is meant to be a place for worship of its Creator. Anyone can kneel down in prayer on the grass, on the sand, on a mountain or in a cornfield. Our planet, because it serves as a medium to reach God, deserves to be protected.

I believe my faith is intrinsically connected to the environment and that people of all faiths can be great advocates of the earth. In Arabic, deen is defined as a religion or a creed, a faith or a belief, a path or a way. Christianity is a deen. Judaism is a deen. Buddhism is a deen. Islam is a deen.

Along these lines, I would like to propose a “Green Deen”, the choice to practice one’s religion while affirming the synergies between faith and the environment.

Islam is what motivates me to be a “steward of the earth.” But this role is not limited to me. In Islam, all humans are considered “stewards of the earth” and, in the Qu’ran, God sets forward clear principles about this stewardship that include taking care of one’s self, others and the planet. These principles can be adopted by anyone trying to live a Green Deen.

I say: it doesn’t matter.

What matters is that the way we treat our planet affects our ability to live here, together. Our patterns of over-consumption – buying things and throwing them away – is creating massive amounts of waste that is becoming a burden on landfill sites and a drain on resources.

As a Muslim living in America, this concerns me, especially since Islam speaks out against waste: “O Children of Adam! Wear your beautiful apparel at every time and place of prayer; eat and drink; but waste not by excess, for Allah loveth not the wasters” (7:31).

Islam respects the cycle of life and encourages humanity to do the same. The Prophet Muhammad once said, “Muslims will always earn the reward of charity for planting a tree, sowing a crop and then birds, humans and animals eat from it.”

I have a desire to connect Muslims with people of other faiths, not to debate the intricacies of theology, but to recognise that collectively, grounded in spirituality, we can work together to protect the planet.

* Ibrahim Abdul-Matin is a Policy Advisor in the New York City Mayor’s Office on issues of sustainability and author of Green Deen: What Islam Teaches About Protecting the Planet (www.GreenDeenBook.com), slated for an October 2010 release by Berrett-Koehler publishers. This article was written for the Common Ground News Service (CGNews).