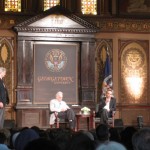 (April 12, 2010) -Tariq Ramadan, a world-renowned Swiss Islamic scholar, is currently making his first appearance in the U.S. since the State Department barred him from entering the U.S. in 2004. On Monday, he spoke at Georgetown University in Gaston Hall along with School of Foreign Service Professor John Esposito about the need for the radical reform in Islam.

Ramadan’s visa was revoked six years ago as he was about to travel to the U.S. to become a professor at the University of Notre Dame. The State Department cited small donations Ramadan made to a pro-Palestinian group in from 1998 to 2002 which was suspected of giving money to Hamas, a group that made the State Department terrorist list in 2003.

In Gaston, Ramadan talked about the theory driving his recent work, that Islam needs “radical reform.” Speaking animatedly and rapidly on the stage from which, six years earlier, he had spoken by satellite because of his travel ban, he said that Muslims should reject the notion that tradition is immovable and that sacred texts cannot be reinterpreted in a contemporary context.

“We need a radical reform in the way we deal with [religious] texts in the context of our time,” he said, adding that while there is an impulse for Muslims to adapt interpretation of sacred texts to the changing world, Muslims also “need to come back with a more approach in light of the text to transform the world.”

“Tradition is moving,” he said. “Show me one tradition that isn’t moving. It doesn’t exist.”

Esposito asked Ramadan to clarify his use of the word “radical.”

“It’ll make a great headline,” Esposito joked. “Tariq Ramadan advocates for radical reform of Islam at Georgetown University. And then we’re in trouble.”

Laughing, Ramadan said he was seeking an “intellectual revolution.”

“This is radical in that I am challenging … the type of authority tradition has in all fields,” he said. “You will see that even sharia is built through human interpretation. We are speaking about immutable principles, but those [only] help you construct the framework, you still construct it.”

In his remarks, Esposito compared Islamic reformers like Ramadan to the Catholic vanguard whose views, which were once viewed negatively, became mainstream belief and practice after Vatican II.

“[The question is] do you realize sacred texts like the Quran are meant to be interpreted over and over again, or do you buy into the idea that interpretations that were made in the past at a classical period are fixed?”

During the question and answer period, Ramadan answered audience questions about the problem of reforming Islam in autocratic countries and about mistreatment of religious minorities in Muslim-majority countries.

“I really respect what you’re trying to do, but I think that you have an obligation to minorities in Muslim-majority countries who are discriminated against,” one audience member said, adding that he does not “hear enough voices” speaking out against discrimination.

Ramadan responded with a comment that criticized Western media.

“I cannot say that enough is done and said. But you have to listen, because there are Muslim scholars who are speaking out against discrimination all the time. In this country, the story goes, and you say, ‘You don’t say enough.’ Well, I say it every day.”

The Q & A session peaked when a man who identified himself as a reporter asked Ramdan about his theory with open condescension.

“You’ve talked about radical reform. Well, here in the West, we press for examples. So I’m gonna press you for an example,” he said. He asked how Ramadan would apply his theory of transformed religion to the problem of the forced marriage of very young girls in some Muslim-majority countries.

“How would your radical reform work? How do you apple your logic to any problem if it’s not this problem? We in the West like our examples up front,” he continued.

The moderator interrupted to tell the man that reporters could ask questions at a separate press conference after the event, but Ramadan responded anyway.

“What I’m talking about, as you’re suggesting, it should have application. What I’m trying to say here is, think about the context … I would push, first, for a very clear principle. Forced marriage—it’s un-Islamic. Unethical. That’s without question. How do you say that in light of the context? In light of the context, we push for a woman’s right to marry when she has the agency to decide to.”

His answer was met with applause, and it was not the only statement he made that was as well received. When an audience member said he had seen dueling forms of religious destruction—minaret bans in Switzerland, French bans on the hijab, and the destruction of Christian churches in the Middle East, Ramadan gave another response that drew applause.

“I don’t need context here. Just the principles. Anything that has to do with the churches or the symbols of other religions, they should be respected. End of discussion,” he said. To do otherwise, he continued, and to ban other viewpoints, is “acting against the very spirit of the Swiss Constitution, the French Constitution, and the American Constitution, just because we are scared.”

Source: Posted by Molly Redden on Vox Populi, the staff blog of the Georgetown Voice, a weekly newsmagazine at Georgetown University. Opinions expressed in posts are those of their author alone unless otherwise stated.