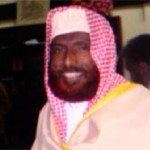 [Ahmed Khalil reflects on his relationship with the late Sheikh Mohamed Rashad, Imam of Ottawa’s Masjid Assalam. He passed away while on the mountain of Arafah, in Saudi Arabia, dressed in the white ihram worn by pilgrims].

I was stunned when I first read the email announcing the death of Sheikh Mohamed Rashad.

For the next few days, I struggled with my feelings, not knowing how to express them. Finally, I thought I’d write about the fleeting moments I shared with the Sheikh.

I first met him at Al-Huda mosque, in Ottawa.

I was young and stupid, thinking I could conquer the world.

With a group of brothers, we formed Al-Huda Productions.

It was an Islamic design and production company run by volunteers out of an empty office at Masjid Al-Huda.

It was there that I came to know Sheikh Rashad.

He had been working tirelessly with the organizers at Dar Assunnah to raise funds to build a mosque that would serve Ottawa’s Muslims in the south.

But it was slow going, and knowing how short life is, Sheikh Rashad decided to take matters into his own hands.

And so, Al-Huda mosque came into being.

Al-Huda mosque was a much larger space, rented and set up in a warehouse near the Via Rail station.

I remember it used be packed to the rafters every Friday prayer.

I recall the struggle to find parking and the delicious Somali food that was sold at $5 a plate after the prayer.

Most of the congregation was Somali, naturally attracted to the Somali Sheikh — though Sheikh Rashad would often ask non-Somali Imams to lead the prayers.

I remember taking the number 8 bus from Billings Bridge to Al-Huda mosque.

After the Friday prayer, the Al-Huda Productions team would convene in our small office space.

The office was tiny and yet, as if blessed by its presence in the mosque, it comfortably held the five of us and our desks, not to mention the servers and many computers we had connected.

After the prayer, people we didn’t know would just come into our office and sit with us.

We were a source of pride – the tech-geeks of the mosque.

At the time, I thought it was very annoying to have people come in all the time unannounced, and longed to move out of the mosque.

Now I think it was truly a blessing to have sat in the company of the mosque’s regulars.

For as long as our office was in the mosque, we caught prayer on time, and often sat for a few minutes with Sheikh Rashad afterwards in reflection.

He would share his thoughts in Somali and English, using Arabic as well. He had an accent of course, but it wasn’t heavy.

He shared brief moments of wisdom with us, as we sometimes — with the impatience of youth — secretly longed for the sessions to end so we could get back to work!

On Sundays, we would find him at the mosque early in the morning teaching Quran to several children, their voices humming as they read from the holy book.

“Izzayyak ya Masry (How are you, oh Egyptian)?” he would say to me sometimes, teasingly; referring to my country of origin.

He would call the Omani brother in our Al-Huda Productions team, “Ya Kharijy (Oh Kharijite)!” teasing him.

The brother was actually an Ibadi, and he disliked being called a Kharijite, but never said anything to the sheikh out of respect for him.

Our respect for the Sheikh increased manifold because of his tremendous efforts to bring renowned Islamic scholars to Ottawa during Ramadan.

At night, these Sheikhs would lead the taraweeh (special prayers) and during the day they would teach Quran and hold classes.

Many times, the Al-Huda Productions team and I would spend the night at the mosque while we worked overtime on our projects.

We naturally benefited from the presence of the scholars particularly during the
last ten days and nights of Ramadan.

Once, I was asked to design a logo for Al-Huda mosque. I worked on it in the sheikh’s office while he went about his own affairs.

I spent a good chunk of time on it, in his presence, and when it was finally
ready he was pleased with it.

On another occasion, the whole team was invited on a trip with Dr. Mohammad Al Sultan, a benefactor of the mosque and of Al-Huda Productions.

We visited the site of the new mosque location, the Topaz Entertainment Centre.

It was at this Centre, thanks to Allah, glory be to Him in the Highest, and to the efforts of many that Sheikh Rashad’s dream became a reality and Masjid Assalam was established.

There, at Masjid Assalam, Sheikh Rashad continued his practice of bringing a scholar every Ramadan.

A main theme in his talks was Islam’s teachings on unity.

He constantly battled against tribalism and sectarianism.

He would tell his Somali congregants that they were all Somalis like each other, and when a non-Somali would come, he would speak in English and reiterate we are all Muslim like each other.

In his wisdom, he had seen the power of Islam in ridding communities of sectarianism and giving equality to all, regardless of ethnicity, creed or color.

One of Sheikh Rashad’s daughters passed away recently in a tragic accident.

A huge funeral was held at Jami Omar, where she was washed and prepared for burial. Unfortunately, I couldn’t attend as planned.

I intended instead to visit the Sheikh later as I was sleep deprived having just been blessed with the birth of my first child.

I heard a lot about Sheikh Rashad’s strength during this trying time.

Having a child of my own, I could imagine the pain the sheikh must have felt.

After all, even the Prophet, may peace and blessings be upon him, is reported to have wept when he lost his son.

Sheikh Mohamed Rashad’s demise is a loss for Canadian Muslims.

What struck me hardest is that I never had the chance to visit him and offer my condolences for the loss of his daughter.

That he passed away before I could see him moved me deeply.

He told Samir, a friend of mine, who was with him on the trip, that he wasn’t feeling well.

Samir smiled at him and told him not to worry; that he’d feel better after he’d had some sleep that night.

The next day, at 3 p.m. in Mecca, garbed in ihram, on Mount Arafah, Sheikh Rashad passed away.

What a beautiful way to leave this world!

May Allah accept him in His fold, shower him with His mercy, reward him for the countless lives that he has touched in his short life here on earth, and grant him eternity in paradise. Amen.

**Ahmed Khalil is the head of Ottawa’s Muslim Association of Canada (MAC) Youth Committee. He can be reached at solotunes@gmail.com.