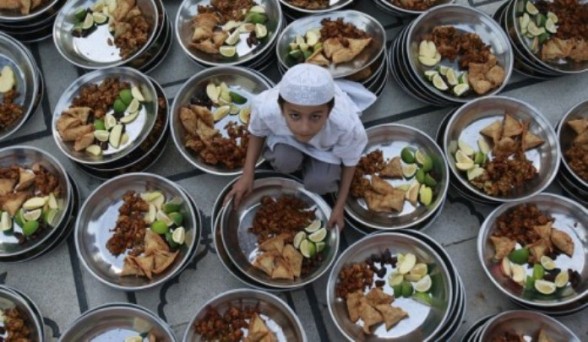 Working with an international, multi-faith team at Search for Common Ground (SFCG), a non-profit conflict transformation organisation, Ramadan impacts not only colleagues who adhere to a diet and lifestyle that affords greater time for spiritual reflection, but also cross-time zone team meetings that are scheduled around fast-breaking iftar dinners, and greater understanding for those working long days with no food or water.

Certainly Ramadan is about more than just daytime fasts and evening iftars; for many it is a month-long journey toward spiritual enlightenment and a practice in self-discipline and humility, when Muslims try to refrain from gossip, profanity, angry discourse, sexual contact (during the daytime fasting hours) and negative thoughts, all the while continuing their daily routines.

The journey differs not only from person to person, but also from country to country. Some worry about whether they are meeting their own high standards when it comes to fasting and work performance, while others experience a renewed all-around sense of calm and focus. And around the world, spiritual and cultural aspects of Ramadan blend in unique ways.

In Islamabad, Rashad Bukhari, Advisor to our Pakistan programme and Urdu editor of the Common Ground News Service, explains: “With the beginning of Ramzan, as it is known in Pakistan, life changes overnight. There’s not only a shift in eating habits and people’s daily routines, but also a change in atmosphere. People feel more conscious about their relationship with God and other human beings through prayer, supplication and giving.”

For many it is both a spiritual and cultural experience. “My family is awake by 3 a.m.,” describes Bukhari. “My wife prepares parathas (a flaky, fried bread), omelette, a bowl of yoghurt and other items for sehri (the pre-dawn breakfast, known in Arabic as suhoor) to provide enough energy to sustain us until iftar, which almost always features delicacies such as pakoras (fried dumplings made with chickpea flour), samosas, dahi bhalleys (a yoghurt dish with dumplings and onions), and chaat (a spicy mixture of chopped fruits).”

And there is a buzz in the air: “Markets are open before dawn and bustling with people before iftar. Mosques are full during prayer times. However, this year Ramzan came amid the worst flood in Pakistan’s history,” notes Bukhari. “The usual festivities have been overtaken by the gloom of lives lost and displaced. This Ramzan’s spirit in Pakistan is – and should be – that of reaching out to those most in need of urgent food and shelter.”

Alae Eddin Serrar, Morocco Programme Manager based in Rabat, describes how “Ramadan has fallen during a hot summer this year. Yet, as always, it has come with the same spirit of peace, mercy and happiness. For a month, Ramadan transports Muslims throughout Morocco to a world of serenity and spirituality.”

Serrar adds, “For most Moroccans, this holy month is the annual opportunity to purify themselves through self-restraint, to strengthen their inner souls by refreshing their relationship with God and to engage in self-reflection in the hope of becoming better human beings.”

It’s a time for looking outward as well as inward. “Ramadan is a time when people visit their family and share hearty meals together,” Serrar continues. “Special dishes, such as harira (a tomato herb soup), chebekia (popular fried honey cookies) and sellou (an almond and sesame seed sweet), are popular features of this holy month. Many spend their evenings going out, meeting friends in cafes or watching new shows on television. Children in particular delight in new clothes for Eid ul-Fitr, a celebration which marks the end of Ramadan.”

And in the United States, where restaurants keep regular hours and most of the population does not fast, Leena El-Ali, Director of Muslim-Western Relations and Middle East and North Africa Programmes, reflects, “It’s a funny thing, this idea that many ‘back home’ have of how hard it must be for me to participate in Ramadan while living in the diaspora, in Washington and, in years past, London (rather than Lebanon).”

In fact, she feels that “it’s during the past 21 years in the West that the deeper meaning of Ramadan has been revealed to me: first, through the example of the Western converts I’ve met, who almost by definition embrace Islamic rites’ underlying purpose more consciously; and then through the relative solitude of not living in a Muslim-majority society, so that a self-sufficient sense of purpose and reflection develop in the absence of a social system that would naturally facilitate things for those within its radius.

“In any non-Muslim country where freedom of religion is assured, there is no need to pity any Muslim: it’s an environment that implicitly nudges us toward the greater jihad – the inner struggle – which more than makes up for any undue outer difficulties we may encounter.”

* Juliette Schmidt is Assistant Director of the Partners in Humanity programme on Muslim-Western Relations at Search for Common Ground. Next week’s second of this two-part series on Ramadan around the world will feature perspectives from Lebanon and Indonesia.