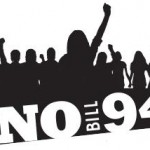 (May 17, 2010) – The bill before the Quebec legislature that would require the niqab be removed when a person deals with government employees and access government services in that province should not be passed, according to the Tessellate Institute (TTI).

The policy briefing from the Institute, authored by Katherine Bullock and Ayesha Haque, argues that Bill 94 would lead to isolation of women who choose to wear the niqab.

“We conclude that Bill 94 will isolate, not integrate, Muslim women wearing niqab, into Quebec society,” according to the briefing.

“We further argue that other Canadian provinces should not follow suit.”

TTI is a private, not-for-profit, research institute that aims to provide Canadian policymakers and the general public academically-rigorous research about policy relevant issues, particularly on topics pertaining to ethnic and religious minorities.

In March 2010, the Quebec Minister of Justice, Madame Kathleen Weil, introduced Bill 94 (“An Act To Establish Guidelines Governing Accommodation Requests Within The Administration And Certain Institutions”) to require that the face be visible during a person’s interaction with the government’s employees, including government departments, agencies, school boards, health and social services and daycare.

“Bill 94 violates their right to freedom of conscience and equal treatment as citizens of Quebec,” state the authors of the report.

Madam Weil, Premier Jean Charest and the Minister for the Status of Women proclaimed their commitment to maintaining gender equity and secularism.

Public support on this issue was tremendous since Bill-94 directly confronted one recent case of reasonable accommodation in which a Muslim woman wearing a niqab was asked to remove her face veil in order to continue in French class.

However, the Tessellate Institute argues that the bill would violate the recommendations of a recent government commission.

“Bill 94 violates the recommendations of the Bouchard-Taylor report, which was commissioned by the Quebec government in 2007 to provide guidelines on how to broach issues of minority integration into Quebec.”