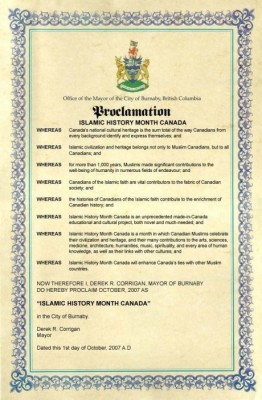 (October 1, 2010) – The theme of the 4th Islamic History Month Canada (IHMC), which begins today with events across the country, is “Islam and the Environment.”

Since its inception in October 2007, IHMC has been officially declared and recognized by the Parliament of Canada, as well as by a number of Canadian cities and organizations.

Mrs. Wahida Valiante, Chair of IHMC and National President of the Canadian Islamic Congress, said, “In 2007, the Canadian Parliament officially declared October as Islamic History Month. During that inaugural year, and later in 2008 and 2009, several Canadian cities also proclaimed October as Islamic History Month in their civic jurisdictions — including Victoria BC, Toronto ON, Kingston ON, Ottawa ON, Calgary AB, Burnaby BC, Port Coquitlam BC, Surrey, BC and Vancouver, BC.”

The Month celebrates and shares the diversity of Muslim civilization, both past and present – including contributions to the arts, sciences, medicine, architecture, humanities, music, spirituality, and other areas of human knowledge.

The Canada-wide tour guest speaker is Dr. Muzaffar Iqbal, founding President of the Centre for Islam and Science Canada and Editor of Islam & Science, a semi-annual journal of Islamic perspectives on science and civilization.

Dr. Iqbal will visit Kingston, Ottawa, Montreal, Toronto, Vancouver and Winnipeg and speak on the topic of “Islam and The Environment: Ethics, History and the Way Forward.”

Among the many activities and events being held across Canada, during IHMC in October 2010 are: exhibitions, lectures, book fairs, films on art and architecture and other complementary presentations.

For more information about IHMC and its upcoming activities/events in different cities across Canada, please visit: www.islamichistorymonth.com/events/calendar.php