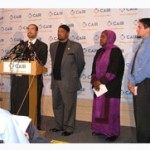 (May 4, 2010) – A prominent national Muslim civil rights and advocacy organization today welcomed the arrest of a suspect in connection with last weekend’s failed car bomb attack on Times Square.

The Washington-based Council on American-Islamic Relations (CAIR), along with several other national and regional Muslim groups, said the alleged actions of the Pakistani-American suspect are not representative of the nation’s Muslim community and urged fellow citizens not to allow the incident to be exploited to advance growing anti-Islam sentiment.

In a statement released this afternoon at a news conference in Washington, D.C., CAIR National Executive Director Nihad Awad said in part:

“On behalf of the American Muslim community, we condemn the attack in Times Square and thank all those who reported their suspicions, disarmed the bomb or are participating in the current investigation. We welcome the arrest of a suspect and hope that anyone involved in the attack will be apprehended and prosecuted to the full extent of the law.

“American Muslims repudiate all acts of terrorism and will continue to work with local, state and federal law enforcement authorities to keep our nation safe and secure. We ask anyone who has information about this attack to contact local police and the FBI. Any person who is afraid to contact the authorities directly should contact CAIR. We will then assist these individuals in contacting relevant authorities.

“In no way, shape or form does this attack represent American Muslims or what they stand for as a faith community. We must also, as a civil rights group, remind everyone that we are a nation of laws and that in our system of justice, every suspect is innocent until proven guilty.

“We urge that our fellow citizens and our nation’s leaders reject the inevitable exploitation of this incident by those individuals and groups devoted to demonizing Islam, marginalizing American Muslims and feeding the unfortunately growing Islamophobic sentiment in our society.”