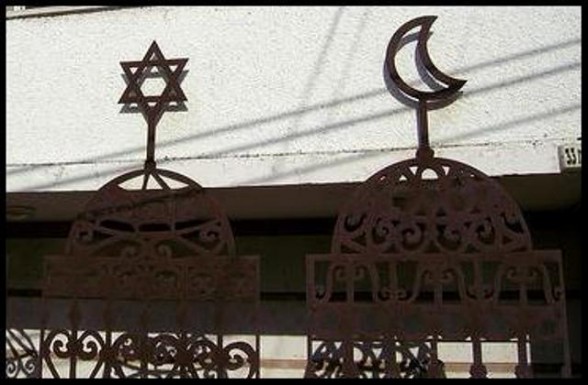 I can see your stares! I get them every time I say we are twinning our mosques and synagogues this month.

For the third year, this exercise of interfaith exchange has progressed in good faith. Synagogues agree to twin with nearby mosques, with congregants visiting each other during Jewish Sabbath and Muslim Friday prayer services and, in some cases, inviting guest speakers or jointly carrying out community events like Hanukkah and Eid parties, or talks by individuals such as the Palestinian author of I Shall Not Hate, Izzeldin Abuelaish.

I have personally taken students to the synagogue. One young Pakistani-born boy, Umair, marvelled at how cordial Jews were and how familiar their service is. And one Palestinian girl, Afnan, who at first refused to enter the synagogue, left saying how different it was from what she’d thought, especially after meeting a warm, educated female rabbi.

Many people wonder about the term “Twinning” to describe the event. But the genealogical history of Muslims is an ancestral path that leads to Ishmael, a son of Abraham, while that of the Bani Israel – the Qur’anic term for the Jewish people – leads to another of Father Abraham’s sons, Isaac.

So we’re children of two brothers – a good reminder actually – since around this time Muslims commemorate Abraham’s willingness to sacrifice his son in obedience to God during Eid ul-Adha, which falls on 16 November this year.

Twinning was initiated to encourage a better understanding between Muslims and Jews living in the West, regardless of political inclinations, with a more direct opportunity to dialogue about their faith traditions specifically.

In Toronto, in addition to Jewish visits to hear imams’ Friday sermons at mosques and Muslim visits to hear the Torah read in synagogues, the Noor Cultural Centre – which promotes cultural education and bridge-building in the Muslim Canadian community – has organised a weekend-long educational study conducted by Rabbi Dr. Reuven Firestone and Dr. Mahmoud Ayoub. The focus of the study is to reach out to students of both communities and discuss images of war and violence in Jews’ and Muslims’ scriptural texts on the weekend of 19 to 21 November.

According to Walter Ruby, the man behind the scenes at the New York-based Centre for Ethnic Understanding: “Twinning has brought together thousands of Muslims and Jews to jointly promote tolerance, understanding, education and goodwill in an effort to combat Islamophobia and anti-Semitism.”

It has grown from a mere 50 places joining hands last year in North America, to more than 100 mosques and 100 synagogues in 22 countries on four continents.

Normally hosted the first weekend in November, Twinning events also take place throughout the month, providing meaningful exchanges for Muslims and Jews to understand each other’s faith – or participate in community initiatives, which could be creative events, or be as simple as having a rabbi and an imam chat over coffee.

In Toronto Dr. Barbara Landau plays a key role in promoting the Twinning and works to ensure such events are not limited only to November.

Landau is a friend and long-standing peace activist in Toronto among Jews and Muslims. She has participated in missions to conflict areas in the Middle East to share how Canadians’ efforts in promoting interfaith dialogue can serve as models for cooperation. She has worked tirelessly with others, including her co-chair at the Canadian Association of Jews and Muslims, Shahid Akhtar, since 9/11 to see that young people in our communities understand each other and also work on common projects for the goodness of humanity.

“The Weekend of Twinning has time and time again shown us that Jews and Muslims can not only live together peacefully as neighbours, but also partner together to build a better community at-large,” said Rabbi Marc Schneier, President of The Foundation for Ethnic Understanding and lead organiser of the Weekend of Twinning.

With many more mosques and synagogues indicating their willingness to participate in the event, Landau is also optimistic that next year’s Twinning weekend will be even bigger and better.

* Habeeb Alli is a freelance writer for the Muslim newspaper The Ambition, self-professed interfaith junkie and author of 12 books on Islam. This article was written for the Common Ground News Service (CGNews).