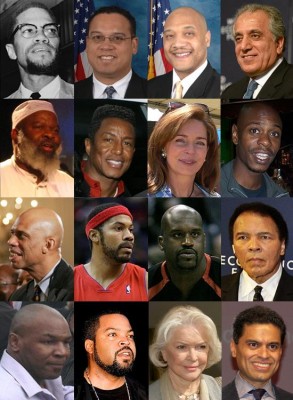 I live in Harlem on a street that is home to three churches and a mosque. The mosque is next door to one of those churches and when male congregants mingle on the sidewalk, it’s impossible to tell who had just been in church and who in the mosque. It’s only some of the women’s headscarves that tell you.

Muslim Americans were not invented on 11 September 2001. Our history with New York, and the rest of the country for that matter, far precedes those attacks. Some of the earliest arrivals were on slave ships that crossed the Atlantic.

Yet the anti-Muslim hate metastasising across the United States these days is ferocious in its determination to drive a wedge between the “American” and the “Muslim” of our identities.

In just one week, a cab driver was stabbed in New York by a passenger who asked him if he was Muslim; a drunk burst into a New York mosque and urinated on prayer rugs; a brick was thrown at an Islamic centre in Madera, California; and a fire at the building site of a mosque in Tennessee was being investigated by the FBI.

“What’s going to happen to me, our mom, sister-in-law, and all the women in the States who wear a hijab [headscarf] and don’t need to be asked if they’re Muslim first?” my sister Nora, a graduate student, asked.

It’s not just about Park51, a proposed Islamic centre and mosque in Lower Manhattan, two blocks away from Ground Zero. There are at least four other planned mosques across the country, miles away from “hallowed ground”, facing anti-Muslim opposition.

Some have tried to blame Imam Feisal Abdul Rauf, the leader of Park51, for provoking still-hurt feelings over 9/11. But depicting him as the imam who kicked the hornet’s nest would display unforgivable amnesia in the face of the manufacture of “Muslim” as a slur in this country.

Despite an appearance by US President George W. Bush at a mosque after 9/11 to show he didn’t hold all Muslims responsible, his administration proceeded to do exactly that: military trials for civilians, secret prisons, the detention of hundreds of Muslim men without charge, the torture and harsh interrogation of detainees and the invasions of two Muslim-majority countries.

When Republicans “accused” US President Barack Obama of being Muslim during the 2008 presidential campaigns, Democrats didn’t utter a single “So what?”

A one-time strategist to US Secretary of State Hillary Clinton, suggested she “go negative” on Obama in 2007 when she was campaigning for president – painting him as too foreign and exotic to lead America at war. She did not heed the advice but her campaign did leak photographs of Obama wearing traditional Somali clothes.

Those incidents and others were steps up a ladder of bigotry that is now delivered with the gravitas of political office. When a former vice-presidential candidate and ex-governor (Sarah Palin), a former House Speaker (Newt Gingrich), and various House members peddle in the most lurid caricatures of Muslims it is not difficult to understand the current crescendo of bigotry.

I have not forgotten acts of violence or attempted terrorism by Muslim Americans over the past year. The Muslim American community has not tiptoed around them. It issued several condemnations but also refused to be held guilty by faith affiliation.

And we refuse to disappear. We will not allow the bigots to pick apart the fabric that is America. Those Muslims mingling outside the mosque on my street are a microcosm of America. We vote – and our votes count, especially in swing states. That taxi driver stabbed in New York is one of the thousands of Muslims who comprise 50 per cent of NYC cabbies.

And we’re also America’s doctors. My sister-in-law, an obstetrician/gynecologist, and I were watching one of those medical dramas when she told me an anecdote that neatly sums it all up: “I was delivering a baby the other day and the father was watching via Skype cam. He was a soldier in Afghanistan. And I thought, here I am: a Muslim doctor in a headscarf delivering a baby whose father is an American soldier in Afghanistan, a Muslim country.”

* Mona Eltahawy is an award-winning New York-based journalist and commentator, and an international lecturer on Arab and Muslim issues. This article was written for the Common Ground News Service (CGNews).