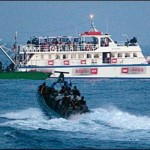 (June 2, 2010) – Canadian Muslims are expressing grave concern over the deaths of humanitarian workers following the storming of an international flotilla of boats headed for Gaza by Israeli commandos Monday.

“Humanitarian workers and their works are sacred and their protection is a collective duty,” a coalition of Muslim organizations said in a press release.

“We are deeply hurt and truly concerned for the injury and loss of life of aid workers heading towards Gaza in their quest to provide relief and support,” the group added.

Israel has come under harsh international condemnation after its actions that killed nine activists and wounded dozens.

The nearly 700 humanitarian workers in a 6-boat convoy were in international waters and trying to break the three-year-old Israeli and Egyptian naval blockade of the Gaza Strip by bringing in 10,000 tons of aid.

The coalition of Mosques and Muslim organizations are calling for an immediate inquiry and release of the aid workers.

“Given the delicateness of the situation, it is imperative to have the human rights and dignity of all parties involved be respected and a proper investigation be pursued in order that justice be done and the truth be revealed.”